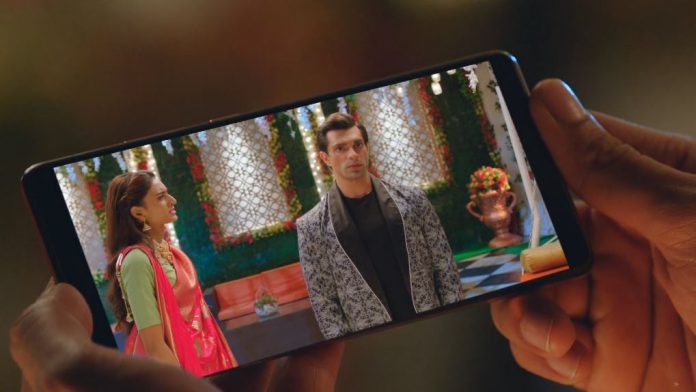 Kasautii Prerna Bajaj truth breaks out Komolika enters Anurag apologizes to Anupam. He didn’t wish to raise hand on Anupam. He explains that he loves Prerna and can’t hear anything against her. Anupam tells him that Prerna is of Mr. Bajaj now. He tells that Mr. Bajaj has evil intentions, but sadly Prerna changed Anurag by her cheat. He asks Anurag how did he say wrong about Prerna, she is wrong to cheat them by her wrong actions. Anurag tells that Prerna had her reasons behind her actions. Anupam feels Prerna has no value of Anurag’s love. He doesn’t want Anurag to ruin his life for Prerna. They break down. Prerna wants to leave the house so that things get normal for Anurag.

Mr. Bajaj asks his manager Mr. Mehra to arrange a mansion at any cost. He wants it for Prerna. He doesn’t care for anyone. Mehra feels Mr. Bajaj is still ruthless. Prerna bonds with Mr. Bajaj’s daughter like always. He doesn’t want Prerna to leave them. He feels he has got his family. He doesn’t want Anurag to break them apart. Anurag thinks what might be the reason that Prerna married a ruthless man. Mr. Bajaj admits his planning to get himself attacked. He makes a confession that he loves Prerna and now he would do anything to get her. Anurag finds him a cheap minded man. Mr. Bajaj tells Anurag that he won’t let anyone else win in his game.

On seeing Prerna, he changes his tone and acts polite. Anurag argues with him, unaware that Prerna is overhearing them. Mr. Bajaj tells that Prerna and his bond is of loyalty and trust. He angers Anurag deliberately. When Prerna questions Anurag, he tells her that Mr. Bajaj planned the attack himself. She doesn’t listen to him. She believes Mr. Bajaj. Anurag tells her that he will come with a proper proof against Mr. Bajaj. He feels Tanvi wants to tell him something. Maasi stops Tanvi from sharing Mr. Bajaj’s secrets with Anurag.

She tells that they have to support Mr. Bajaj being his family. She asks Tanvi not to sympathize with Anurag. Tanvi tells Maasi that Mr. Bajaj has really become Raavan to separate Ram and Sita. Anurag overhears them and realizes that they are hiding Mr. Bajaj’s evil. Prerna and Mr. Bajaj get into an argument, which gets recorded in Anurag’s phone. Prerna asks Mr. Bajaj to never break his promise, he should never harm Anurag. She defends Anurag. She feels she has done wrong with Anurag and his intentions aren’t wrong either. She tells him that she never expected Anurag to love her so much. She knows he is very important to Anurag, and doesn’t want to become important for Mr. Bajaj.

She tells him that she is just of Anurag, she loves him a lot and got married just to save his life. She mentions that the marriage motive was to free him from Ronit’s murder case. She was helpless to marry Mr. Bajaj. She regrets the marriage and admits her love for Anurag. Mr. Bajaj expresses his dislike to hear this again and again. She tells him that they will leave Basu mansion to get some peace in their lives. Anurag makes a prayer to find some way so that he can learn the hidden truth. He looks for his phone.

He meets Shivani and learns about a dance video she shot. She tells him that she is looking after him just to be answerable to Prerna. She is sure that Prerna loves Anurag. They come across the recording. They learn that Prerna has married Mr. Bajaj just to save Anurag’s life. They can’t believe this. Anurag wants to get rid of Mr. Bajaj. He feels strong that he has earned Prerna’s love back. Komolika will soon make an entry in the coming track.