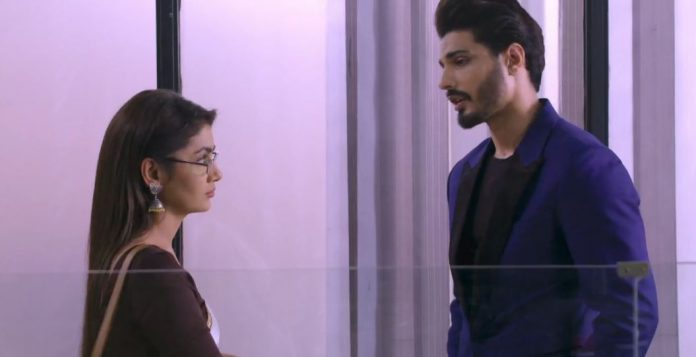 Kumkum Bhagya Pragya Prachi relation to unveil Abhi and Purab have fun at the pub. Abhi tells them that his wife is the best, who never fights him. He misses his wife. He wanted Pragya with him. He knows that she can’t live without him, just like he feels the same. Purab too wants his wife Disha back. Abhi too wants Pragya back. They dance at the pub until they drop. They have a great time. Purab doesn’t want Abhi to tell their secrets to anyone. Abhi tells Vikram about Purab getting much drunk at the bar. He tells that Purab danced a lot. Pragya reaches the office to meet the peon. Abhi doesn’t see her. He fails to know that Prachi is his daughter. The truth gets hidden from him by fraction of seconds.

Pragya meets the peon to know about Rishi and Priyanka’s case. She learns that Priyanka has trapped Rishi. She speaks to him and gets the evidence against Priyanka. She thanks him. He doesn’t want his name to get involved in the matter. She promises to not put him in any problem. Rhea gets happy that Ranbir loves her so much. She shares her happiness with Aaliya. Aaliya returns home after some days. Aaliya tells them that she was busy in the meetings. Aaliya asks Rhea to share about her love life. Rhea doesn’t tell them about Ranbir.

Aaliya feels Rhea has grown up too early. Purab meets Pragya. She finds him disturbed. He doesn’t tell about his confusion. He thinks Disha is in love with Ritik. He tells Pragya that Abhi misses her a lot. Pragya tells him that she also misses Abhi. He doesn’t want them to fight because of Rishi and Priyanka. He tells her that he always supported her. He feels she is supporting the wrong person. She tells him that she is just following the leads she got. She finds Rishi is innocent. She tells him that Priyanka has trapped Rishi.

He asks about her daughter. She fails to tell him about Prachi. Purab learns that Aaliya has come back. He plans to meet Pragya’s daughter. Prachi meets Pragya, while Purab gets busy in his work. They have a hit and miss. Aaliya finds Disha’s picture and realizes that Purab still loves Disha. She wants to get rid of Disha. Vikram shows his appreciation towards Prachi. He tells Pragya that Abhi needs the credit for supporting Prachi’s talent. He asks Pragya to meet Abhi. Abhi wants the lawyer to get Rishi punished. Lawyer wants to meet Priyanka.

Vikram asks Abhi to meet Prachi’s mum for some time. Lawyer praises Abhi and Vikram’s bonding. Abhi discusses the case. He decides to meet Prachi’s mum later. Aaliya confronts Purab about Disha. She asks him if he loves her or not. Purab has no answer for her. He just wants her to be fine. She tells him that she wanted him to always have his engagement ring. She wants him to remember their marriage. Vikram tells Pragya that Abhi is busy with his personal work. He is surprised seeing Rhea’s attachment with Pragya. Pragya shares the insights about her meetings with Rhea. She tells him that she finds Rhea’s nature similar to her husband, Abhi’s nature. Vikram gets close to find Abhi and Pragya’s relation.