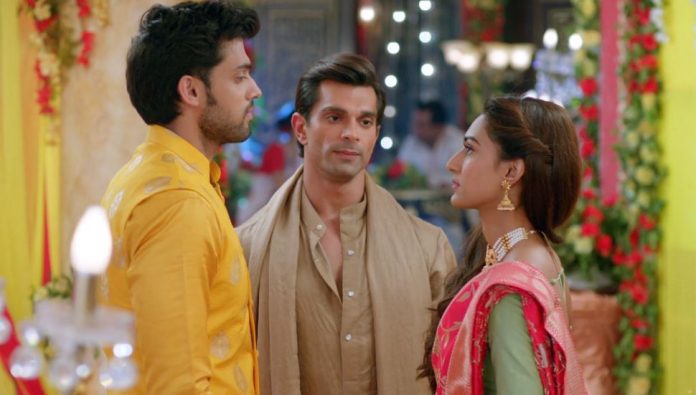 Kasautii Zindagi Kay Bajaj unites Anurag Prerna Mr. Bajaj faces a big jolt when his own daughter becomes target of his madness. Anurag unmasks Mr. Bajaj and sees his evilness. Mr. Bajaj reveals that he has married Prerna just for his daughter’s sake, but he fell into love with Prerna. He tells Anurag that he gave him enough time to get away, but Anurag didn’t deter and went on gathering evidence against him. He asks Anurag how could he think of snatching Prerna. He warns Anurag once again. He tells Anurag that he will not spare anyone who attempts to break his happy family.

Prerna and Cookie try to rush to Mr. Bajaj and save Anurag. Prerna breaks the door to get inside in time and save Anurag, her true love. Mr. Bajaj tells Anurag that its time for him to die. Prerna stops him and protects Anurag. The family members wake up and find Moloy injured. They try to help Moloy and take him for the aid. Prerna asks Mr. Bajaj to remember their deal. She tells him that she loves Anurag and doesn’t want him to get hurt. She expresses that she married Mr. Bajaj just for the sake of saving her true love. Anurag gets delighted to hear this from her. Mr. Bajaj’s rage doubles seeing their romantic eye locks.

Cookie witnesses Mr. Bajaj’s madness when he hurts Prerna as well. She calls Prerna as her mum and gets her voice. She doesn’t listen to anyone and tries to save Prerna. She falls down. Mr. Bajaj gets moved seeing his daughter hurt. He gets numb and realizes his mistake. He rushes his daughter to the hospital. He realizes that Cookie has called Prerna before him. He feels Cookie loves Prerna more, undoubtedly. He learns that Cookie is in need of blood. Mohini warns Mr. Bajaj after knowing his mad rage.

She asks Prerna not to help Mr. Bajaj and his daughter. Prerna wants to donate blood to Cookie. Mohini thinks this is the time when they can trouble Mr. Bajaj and make him realize his mistake. She asks Prerna not to go against her. Mr. Bajaj gets angered when Prerna doesn’t show any response. He goes to call Mehra. He asks Mehra to arrange blood for Cookie. Mehra fails to do this task since the blood group is rare. Mohini gets angered when Prerna goes to give blood to Cookie. Prerna and Anurag regard Cookie as their own daughter.

They love Cookie and want to save her life when its possible for them. They tell Mohini that their enmity isn’t bigger than Cookie’s life. Mohini gets emotional. She is much hurt seeing Moloy’s state. She tells Anurag that she hates Prerna, since she has divided them unfairly. She holds Anurag responsible for Moloy’s state. She gets angered. Anupam breaks the truth to Mohini that Prerna paid the price by sacrificing her love and happiness. He tells that Prerna has married Mr. Bajaj just to save Anurag. He counts Prerna’s favors on them.

He tells that they have Anurag with them just because of Prerna. Mohini doesn’t believe him. Anurag shows her the confession video of Prerna. Mohini is in shock and understands Prerna’s worth. Moloy and Cookie get fine by Anurag and Prerna’s efforts. Mr. Bajaj gets thankful to Prerna that she donated blood to his daughter. He realizes Prerna and Anurag’s true love. He decides to divorce Prerna and unite her with Anurag. He tells Anurag that Prerna was always of Anurag only. This brings a happy moment for Basus. Komolika will be bringing the storm in their lives.