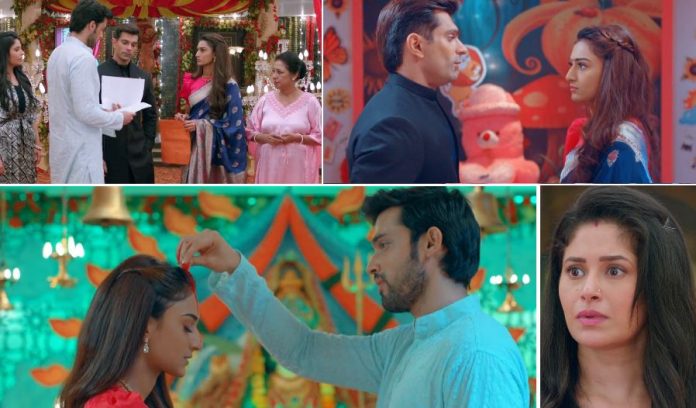 Kasauti Zindagi Kay Marriage track Bajaj mystery unsolved Mr. Bajaj doesn’t lose his hatred. He still hates Anurag and threatens to kill him if given a chance. Anurag doesn’t care. He asks Mr. Bajaj to do his wishful. He tells that he would get Prerna as she belongs to him. Mr. Bajaj is concerned for Cookie as of now. Anurag learns that Moloy wants to meet him. He can’t believe that Moloy has regained his speech. Mr. Bajaj wants to destroy everyone if his daughter suffers. Anurag is excited to meet his dad. Moloy has a sweet union with his family. Basus are very happy for Moloy’s recovery.

Prerna misses Cookie. She wants Cookie fine. She feels motherly love for Cookie. She donates the blood and goes to see Cookie. She learns that Moloy has got conscious. She meets Moloy. She gets surprised on finding him completely fine. The family sheds tears of happiness. Moloy tells her that he will try to fill Rajesh’s place in her life. He loves her as her father. Prerna wishes the best for Basus. Prerna is worried for Cookie. Mr. Bajaj learns that Prerna has donated the blood to save Cookie’s life.

He tells Maasi that he had arranged the blood units, but with Prerna’s step, that isn’t needed. He is touched by Prerna’s gesture. He thinks his choice to get Prerna as Cookie’s mother was not wrong. Cookie also regains her voice and gets talking to Prerna. She regards Prerna as her mum. She doesn’t want to talk to Mr. Bajaj, remembering his crime of hurting Prerna. She realizes that Prerna just loves Anurag. She supports Prerna. Mr. Bajaj tries to hug his daughter. He wants to apologize for his devilish behavior. Prerna tells Cookie that like she loves her, even Mr. Bajaj loves her a lot. Cookie tells that she has seen Mr. Bajaj attacking them. Prerna tells that Mr. Bajaj has done everything for her.

Consequently, Cookie forgives Mr. Bajaj. He is happy that his daughter didn’t get away. He is grateful to Prerna. He takes a decision. While the families return home, they get a good welcome. Moloy makes it clear that he is back and he will take decisions now. He doesn’t want his relatives to spoil their happiness. He wants Prerna to stay with them. Mr. Bajaj tells them about his decision to give divorce to Prerna. Anurag and Prerna can’t believe this. Mr. Bajaj tells them that he has accepted their true love.

Moreover, he knows that none can challenge Anurag’s love for Prerna. He praises their love for passing so many problems. He unites AnuPr for once and all, bringing positivity and happiness. He apologizes to Anurag. He makes Prerna sign the divorce papers. He later informs them about the divorce procedure completing. He tells Prerna that he has organized her marriage with Anurag. Prerna gets too happy. Anurag and Prerna get married in front of Durga Maa. Komolika is coming back to ruin their happiness.

Mr. Bajaj makes an exit from Prerna’s life. His motives to ruin Basus also end. His mysterious revenge streak towards the Basus remain unsolved. Will Mr. Bajaj reveal his connection with Basus and forgive them for the past? Keep reading.