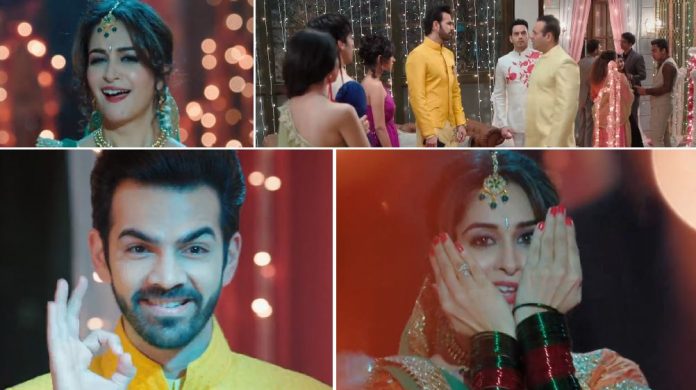 Kahaan Hum Sonakshi Madhuri avatar stuns Rohit Naren poses problems for Rohit and Sonakshi. He believes that Sonakshi is a gold digger and not a true person as she pretends. He wants a pre-nuptial agreement made. He plans to get the agreement signed by Sonakshi. He wants to secure Rohit’s life. He doesn’t want his son to get cheated in love. He feels the marriage should stop. He wants Sonakshi to accept his terms if she wants to marry Rohit. He thinks this will be a test of Sonakshi’s love. He tells his plans to Yash. He asks Yash to get the agreement made on time, so that he gets it signed by Sonakshi during the engagement. He tells Yash that all he wants is his family happiness.

Yash gets worried. He doesn’t want to break Rohit’s trust. He is more like a friend for Rohit. He asks Naren to think again, Rohit may not forgive them for hurting Sonakshi’s heart. Naren promises to handle everything if the matter gets known to Rohit. He tells Yash that he will not let things go out of hand. Meanwhile, Sulochana tries to brainwash Raima against Sonakshi again. Raima tells her that everyone knows Sonakshi is Rohit’s love. She just wants them to be happy. She asks Sulochana not to try brainwashing her again, since it will not work. Raima helps Veena and Pooja in the arrangements.

Raima tells them that Sonakshi too asked her help in selecting the engagement ring for Rohit. Veena is excited for Rohit’s engagement. The Sippys want to welcome Sonakshi in the family soon. Sonakshi tries hard to get Madhuri in the marriage function. When Netra tells her that this isn’t possible, Sonakshi informs Rohit that his dowry demand of getting Madhuri in the function can’t be fulfilled. Rohit asks her to better be ready for paying the penalty. Sonakshi tells him that she will try once again. She goes for shopping with Raima. He buys everything of Raima’s choice, knowing Raima knows Rohit very well.

Sonakshi pulls her leg about Sumit. She asks Raima to meet Sumit. She is happy that Raima is reforming Sumit. She wants them to become a couple. Elsewhere, Rohan meets Pari to warn her about Deepa. He decides not to meet Pari for few days until Deepa clears her doubt. Pari asks him to limit his feelings first. Pari isn’t scared of anyone. Rohan doesn’t want any risk for his marital life. Rohan and Pari’s close moments get recorded by Deepa’s spy. Deepa gets the video. She wants to show it to Tanya and expose Rohan’s affair with Pari. Rohan wants to meet Deepa and request her to not expose his truth.

Deepa wants him to mend his ways. Rohit asks Sonakshi to decide everything by her choice so that he gets to know her more. He doesn’t want Raima to decide for him. He is ready to try different choices, but only by Sonakshi. Sonakshi agrees to him, while Raima feels bad on hearing this. Raima leaves her phone in Sonakshi’s green room. Mahesh takes the disguise of a tailor and reaches close to Sonakshi. He takes one of her picture from the wall. Sonakshi learns about the imposter. She meets the tailor and wonders whom did she meet. Mahesh runs away. He wants Sonakshi. Rohit finds Raima upset.

He tells Raima that he doesn’t want to hurt Raima or Sonakshi. He tells that he wants to know Sonakshi’s choices, just to know her well, like in courtship. He tells her that she will always be special for him. Raima is happy after clearing her doubts. Yash gets the agreement made. He doesn’t want to hurt Rohit. He is troubled by Naren’s move. He lies to Naren to postpone the agreement thing. Naren creates a drama in the engagement when Sonakshi gets late. Rohit manages to defend his lady love. Sonakshi takes Madhuri’s avatar to perform on Madhuri’s song and surprise Rohit. She fulfills Rohit’s wish, while Naren gets more angered with the actress type performance.