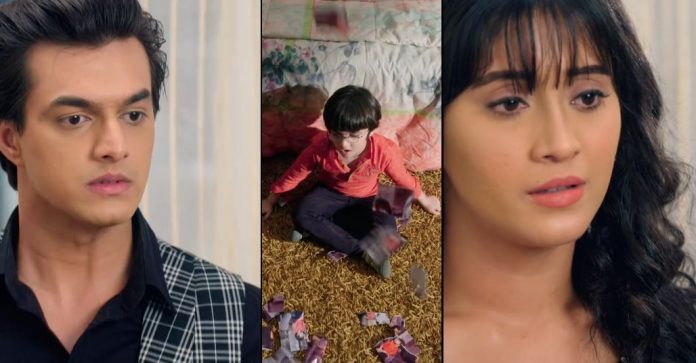 Yeh Rishta Twist Kartik Shocker Naira appalled Naira mentions about Vedika. Kartik gets upset at the mere mention of his wife. He doesn’t want the reality to strike his happiness. Naira tells Kairav that his dad is also scolding him. Kartik tells her that he will compensate for scolding Kairav. He wants to convince his son with love. He plans a day with Kairav. Kairav gets the impression that Kartik is a bad person. Goenkas learn that Vedika hasn’t returned home yet. They get worried and want to know about Vedika’s whereabouts. Surekha finds Vedika’s letter and passes it to Kartik.

Kairav gets upset thinking of his angry dad. He doesn’t want to play with anyone. Naira is hopeful that Kartik will cheer up Kairav. Naksh and Naira decide to bake two cakes for Kartik and Kairav, so that they can throw the best birthday party. Naira wants to tell Kairav that Kartik’s birthday is on the same day. She recollects the times when she celebrated both birthdays together keeping Kairav unaware. She wants Kairav to be happy with his dad. She mentions her wish to start working again so that she can get independent. Naksh and family applaud her decision.

They want Naira to keep her esteem high always. Naira’s wounds get fresh when she recalls Kartik doubting Mihir and her when she worked before. She wants to find some job that doesn’t get troubles for her. Naira asks the supportive family to look after Kairav when she isn’t at home. The family is happy to get this sweet responsibility. Vansh and Kairav share their feelings. They both are angry on their dads, who scold them and doesn’t treat them well. Vansh asks Kairav to make new plans. He is glad that Kairav didn’t get hurt in the Raavan Dahan incident. Kairav tells Vansh that he doesn’t want to go to Goa. He isn’t willing to celebrate birthday with Kartik.

Vansh refuses to help him further. He is scared of Samarth’s anger. Kartik prepares for Kairav’s birthday. He is too excited. He wants to do his best for his son. Suwarna and Manish share their happiness on seeing Kartik becoming the best dad. Naira asks Kairav why is he upset. She doesn’t know his thoughts about Kartik. She tells him that he can spend time with his dad. She tells him about Kairav and his dad sharing the birthday. Kairav doesn’t get happy. Naira wants him to celebrate it well. He doesn’t react.

When Kartik calls, Kairav doesn’t want to talk to him. He throws the phone away, which answers the call. Kartik gets mesmerized on seeing Naira. He thinks of their old golden moments. Naira realizes that he is on the video call. They get into an awkward moment when he tells her that he couldn’t help, but just watch her. She reveals her decision of joining some good job. Kartik gives her liberty to work as she wishes. He realizes that his words have hurt her. He unknowingly reminds her their bitter fight regarding Mihir. Naira’s heart hurts. Kartik wants to apologize to her once again. Kartik rushes to meet Kairav. Kartik and Naira will be left appalled when they know the hatred that filled in Kairav’s heart for Kartik.