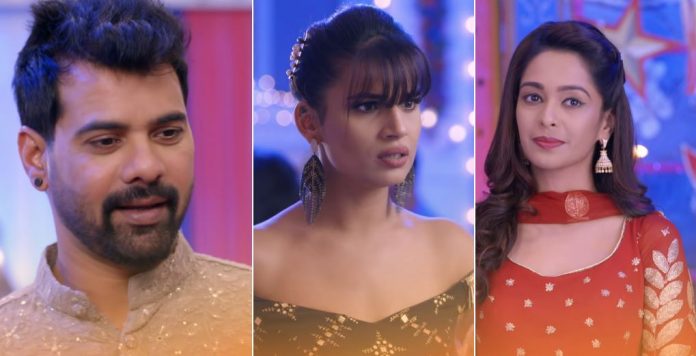 Kumkum Bhagya Tonight Muskaan Quick Snips Rhea awaits Prachi in the party. Priyanka angers her that Ranbir doesn’t love her(Rhea). She asks Rhea about her flirting. She tells Rhea that Ranbir seems to be in love with Prachi. Abhi tells Sarita that Prachi is also like his daughter. Sarita suggests him to exchange daughters with Anuradha/Pragya. Abhi likes the idea. He wishes to have a daughter like Prachi. He thinks if his other daughter be like Prachi. He asks Sarita to help him in this regard. Sarita tells him that both Abhi and Pragya bond so well with their daughters, that Rhea can really stay happy with Pragya while Prachi can stay with him in his mansion. Prachi likes Sarita’s jokes.

Abhi tells Sarita that he really regards Prachi as Rhea, he isn’t biased ever. He tells how the relationships of heart matter to him so much. Prachi is aware of his big heart, since he has sheltered all his friends at his own house. Rhea grows jealous of Prachi. She gets realizing her mistake of her silly bet pushing Ranbir towards Prachi further. Abhi anxiously waits for Pragya’s arrival in the party. Pragya’s arrival gets delayed. They both are still unaware about their daughters.

Ronak speaks to Tejpal. He gets summoned for the court hearing. Muskaan gets accused for Lovely’s suicide move. Tejpal defends Muskaan. He wants the family members to give the statement in favor of Muskaan to protect her. Tejpal tries hard to get help for Muskaan.

Gayatri doesn’t think Muskaan is responsible for Lovely’s suicide. She tells that she can’t believe Lovely’s weak step. She clears Muskaan’s name. Bua, Bunty and Dolly get completely against Muskaan. They speak bitter things and defame Muskaan. Surendar is happy to influence the family members into lying in the court. Bua convinces Dolly and Bunty to speak against Muskaan to get rid of her forever. Ronak gets enraged on his family, who back stabbed him. Sir ji also makes an appearance in the court. Sir ji shows his burnt face to the judge. He speaks about Lovely’s greatness to help him.

He tells that Lovely used to dislike Muskaan and was much disturbed. He tells the judge that Muskaan isn’t responsible any way. Doctor tells the court that Lovely was mentally disturbed and took this suicide step. The statement goes in Muskaan’s favor. Ronak is unaware of Sir ji’s truth. He thanks Sir ji for helping Muskaan. Surendar proves that this doctor is fake. Tejpal’s fake witnesses get exposed. Tejpal gets suspended from his practice. Muskaan gets punished by the court. Tejpal fails to help Muskaan. She lands in jail, while Ronak shatters.