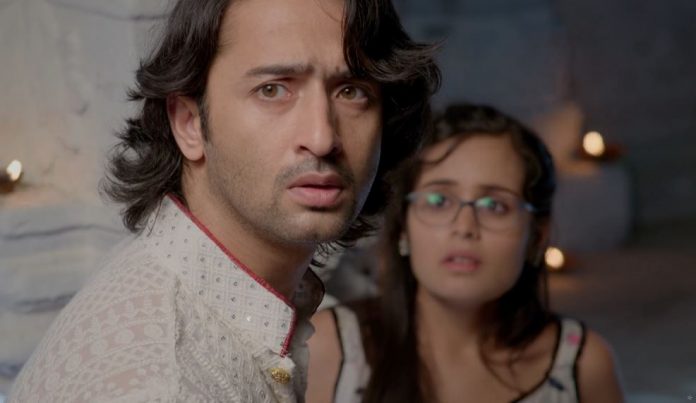 Rishte Pyaar Mishbir united Meenakshi awaits miracle Mehul figures out that Meenakshi has been spying on him. Mishti hides from Mehul so that he doesn’t inform Abir about her spying. Mehul suspects Meenakshi. When he leaves, Mishti tries to get away. She doesn’t know Mehul’s motives. She feels Mehul isn’t a good man. She informs Rajshri that she is busy in NGO work and would come home late. Mishti hides at the same place until the people disperse. Meanwhile, Rajvansh family meet Kuhu to wish her on Karwachauth. Kuhu awaits Kunal. Abir tells them that Kunal will come on time. Vishwamber shares the mahurats for Abir and Mishti’s engagement.

Meenakshi chooses the early mahurat for Abir’s happiness sake. She knows Abir will leave the house after the engagement, but she can’t be selfish to postpone the engagement and turn him upset. Abir realizes that Meenakshi cares for his happiness. He wants to know about Mishti. He calls her up. He lies to Rajshri that Mishti is busy at the NGO. He tracks Mishti’s location. He wonders why did she go to Rajgarh. Mishti speaks to pandit and gets more information about Mehul. She learns about Mehul’s wife. Pandit tells her about Parul, but Mishti thinks about Meenakshi. Mishti doesn’t learn that Parul is Mehul’s second wife.

She thanks pandit for the information. She wants to go home soon. Kunal surprises Kuhu when she is about to break the fast by seeing his photo. Kunal has come to her just to keep his good image. Kuhu gets new hopes. Mehul leaves from Rajgarh. He misses to see Mishti. Abir meets Mishti in Rajgarh. He confronts her for the lie. She fears to tell Mehul’s truth to Abir and lose him. She daydreams about sharing her doubts about his dad and angering him, which leads to their breakup. She wants Abir to trust her word. She avoids making any mistake. She doesn’t want to confide anything unless she gathers proof.

She knows Abir won’t believe her, when its about his dad. She has kept Karwachauth fast for Abir. She faints suddenly. Abir understands that she has kept the fast. He takes driver’s help to know about the place. He wants to comfort Mishti and take care of her. They reach the temple. Abhi breaks Mishti’s fast. He still wants his answers. Mehul is mistaken that Meenakshi is gathering proof against him. He calls her to warn. Meenakshi doesn’t entertain him. She prays for her family. She awaits a miracle. She wishes that someone saves her family from Mehul. Abir asks Mishti why didn’t she tell him before coming to Rajgarh. Pandit names Mehul by mistake. Abir learns that Mishti was spying on his dad. He wants to know the reason.

Sufiyana Pyaar Mera:
Saltanat and Zaroon take disguise and enter Madhav’s house to keep an eye on Rupali. Rupali learns about them when she finds Zaroon’s fake get up falling out. She wants to trouble them by a truth. She tells them that Madhav loves Saltanat. Madhav worries that she has learnt the truth and intentionally did this. Rupali wants to break their unity by making them fight among themselves. Saltanat gets upset knowing Madhav’s feelings.

Muskaan:
Muskaan gets jailed for ten years. Ronak meets Muskaan and gets emotional. He tries to cheer her up. They have an emotional hearty talk. Muskaan wants him to move on and take care of family. Ronak asks her to take care of herself. He promises to meet her every day. He gets worried when she faints down. Ronak asks the jailer to help Muskaan and rush her to the hospital.