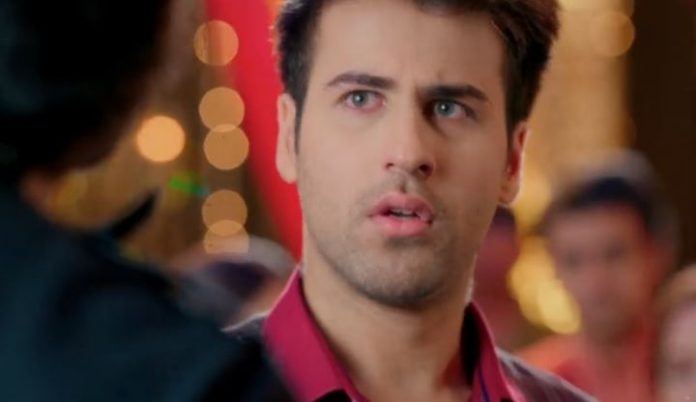 Yeh Rishtey Pyaar Kunal faces ultimatum Abir wants to know why was Mishti visiting Rajgarh temple. Pandit tells him that she had come to meet Mehul and know about him. Abir gets puzzled. He wants Mishti to answer him. He rushes to buy some food for Mishti. Mishti asks the pandit not to reveal anything to Abir. Abir overhears her and gets disturbed. He finds something wrong. He doesn’t listen to Mishti. On the other hand, Kunal isn’t able to forget Mishti’s rejection and his insult. He hates Maheshwaris, who insulted him. He thinks Mishti has won by snatching Abir from the family. He is much angry that Abir is marrying Mishti, the girl who rejected him. He learns Kuhu’s lie.

He gets angry knowing her plan to fool him and call him for Karwachauth fast rituals. He feels cheated once again. He thinks if he should stay with such a wife, who always fools him. He doesn’t realize his own mistake. He wants to confront Kuhu and teach her a lesson. Mishti gets help from the pandit. She learns about the fair organized in the village, which can help her know about Mehul’s past. She gets thankful to the pandit. Mishti tries hard to explain Abir, but he doesn’t pay attention to any clarification, Mishti is left in tears when Abir goes away. Kunal finds the family preparing for Abir’s engagement.

He tells them about Kuhu and his anniversary. He surprises Kuhu by getting a cute cake for her. He celebrates his anniversary with her. He hurts her heart once again. Abir feels he has been fighting with his Nanu, mom and brother just for Mehul and Mishti’s sake. He doesn’t want to fight Mishti for Mehul. He feels he can just trust two of them. He doesn’t want to make any choice again. Rajshri forgives Kunal when he apologizes. She is glad that he realized his mistake and repented also. Kunal tells Kuhu that she can’t fool him, he is much ahead of her. He wants to divorce her and give her sorrow. Kuhu gets shattering. Abir feels he has been wrong to get angry on Mishti. He gets a beautiful surprise from Mishti.

Mishti recreates their first meet moment and surprises him. She doesn’t want to tell him about Mehul unless she has solid evidences to support her statement against Mehul. She tells him that she wanted to get married in Rajgarh, Mehul’s village. She tells about her arrangements at Mehul’s house. Abir believes her. He apologizes for doubting on her intentions. She tells him that she will always protect him from sorrow. Abir and Mishti unite again. They celebrate Karwachauth happily. He gives the good news of their engagement date. She wonders how will she find out about Mehul. Mehul confronts Meenakshi for spying on him.

She denies the blames. She asks him how could he talk to her with disrespect. He demands her to transfer her property to him. She doesn’t entertain his mad accusations. She tells him that she won’t risk her lovely family to play games with him. She just wants her sons. Kunal spoils Kuhu’s mood by reminding about the divorce. Kuhu tells him that she isn’t weak, her family will accept her fate and support her. She doesn’t think divorce can break them down. She blames him for playing games and being so selfish.

She tells that he has changed her into a selfish person too. She reminds him that she has nothing to lose, but he will lose his relations. She warns him. She tells him that he will face dire consequences when his family learns about his divorce. She asks him to be ready to lose his family and fall lonely. She calls him a big loser and angers him. She knows he won’t change his mind. Kunal feels low. Mishti doesn’t like hiding things from Abir. He asks her if she doesn’t want to get engaged so soon. She confesses her love for Abir. She wants their story to always have lots of love, that would keep them together forever. Abir proposes Mishti for marriage. He fears to lose her. He wants to marry her and take her home.