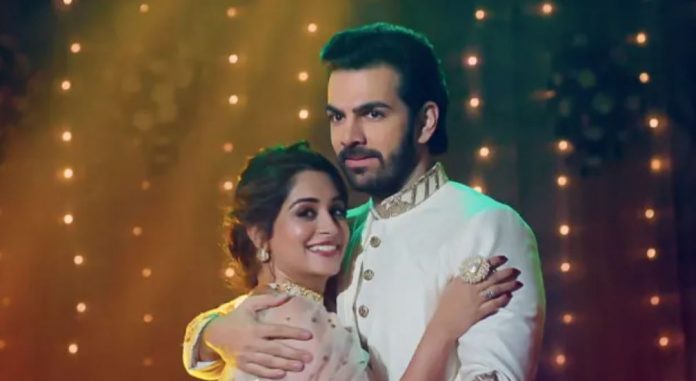 Kahhan Hum Starplus Forced marriage for Sonakshi Sonakshi’s life gets saved by Mahesh. She is impressed by his gesture. She finds him suffering some burns. She sympathizes with her. Sonakshi learns Netra’s problem. She tells Suman that the footage clip is damaged and all the backup scenes have to be reshot. She wants to visit the set and finish the shoot on her wedding day. Suman stops her from leaving the house. She is already tensed about the fire incident. Suman doesn’t want Sonakshi to upset Sippys by going on shoot. Netra makes a plan to complete the shoot right at Sonakshi’s house. Sonakshi hides from everyone to complete the shoot.

Mahesh makes plans to break Sonakshi and Rohit’s marriage. Rohit learns about Sonakshi’s shoot. He feels proud of her. Sonakshi falls in new trouble when Mahesh tries to kidnap her. She gets much injured while she struggles to get free from Mahesh. Mahesh tries to forcibly marry her. He is obsessed with Sonakshi aka Parvati. Raima too wants to stop Rohit’s marriage. Sonakshi gets a huge shock when she finds Mahesh’s truth. Mahesh becomes her groom. He tells her that he had been stalking her. He confesses his love to Sonakshi. She rejects his love. She gets into a fight with Mahesh. Rohit realizes that Sonakshi is in trouble.

Mahesh tricked Rohit once by saving Sonakshi from the fire. Will Rohit save Sonakshi in time? Indeed, Rohit will be saving his ladylove and marry her by crossing the hurdles posed by Raima. Keep reading.

Raghu and Dhanak’s differences get sorted out. Akshay and Maya’s evil plans work in Raghu’s favor, since his innocence gets proved to Dhanak. Dhanak decides to reconcile with Raghu and make up for their precious lost years. Dhanak resumes her official duty as an IPS officer. She wants to deal with her enemies with the power of her uniform. Maya threatens Dhanak. She blames Raghu for killing her husband. Maai and Dhanak protect Raghu. Dhanak saves Raghu from the arrest. She deals with the policemen, who were misled by Maya. Raghu gets the news that Akshay has escaped from the prison. He is worried that Akshay will try to exact revenge on them. He wants to protect Ronak. Maya plays a drama to stay back in Raghu’s house. Dhanak leaves Maya with a warning.