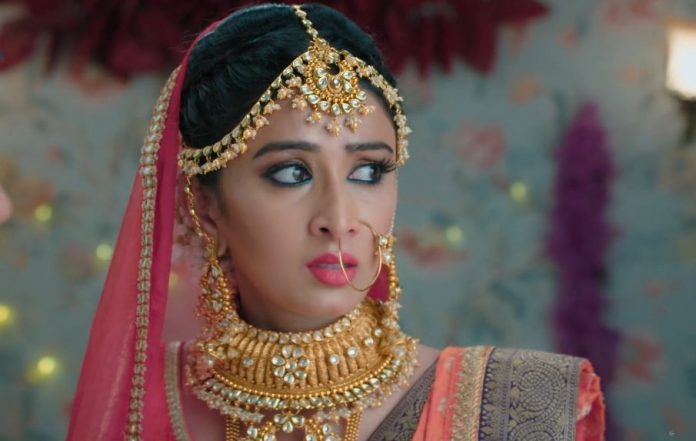 Kahan Hum Kahan Tum Raima misleads Rohit this way Veena asks Pooja to check on Sonakshi once. Pooja rushes to Sonakshi. Raima gets breathless due to tension. She doesn’t want anyone to see her. She fears that Sonakshi will come back. Sulochana tells her that Sonakshi won’t come until marriage. She tries to make Raima relax. Raima asks Sulochana to get the oxygen cylinder for her. She feels she will get caught soon if anyone finds her in this state. Pooja finds Sulochana with Raima. She can’t believe that Raima has taken Sonakshi’s place. She asks the reason for this switch. Raima doesn’t get in state to answer her. She waits for Sulochana.

She gets the oxygen supply on time. Raima makes a new story to mislead Pooja. On the other hand, Mahesh makes Sonakshi ready as his bride. When she gets conscious, he shocks her by telling his obsession since past few years. He tells her that he had been keeping an eye on her since her audition day for the Parvati’s role. He tells that he had stolen her bridal dress which she had worn in the marriage scene. He tells Sonakshi that he madly loves her, Rohit can never match up his love standards. He asks Sonakshi to accept his love.

He shows his tattoo which he got by bearing a lot of pain. He tells her that his love for her will never fade, he will marry her and take her to his village, away from the city crowd. Sonakshi finds him completely mad. Mahesh tells Sonakshi that she should get ready for the marriage. Mahesh exhibits his evil side. He doesn’t seem to be a husband bullied by his torturing wife. He expresses his craze for Sonakshi since years, the reason for his failing marriage. He doesn’t care to leave behind his wife and child to marry Sonakshi. In a similar way, Raima acts evil when she lies to Pooja that Rohit wants to marry her (Raima).

Meanwhile, Pari flirts with Akhil, who innocently believes her. Akhil doesn’t know that Pari is using him to make Rohan jealous. Pari wants to attract Rohan once again. She distances Rohan to trigger his feelings. Rohan gets busy in taking care of his wife Tanya. Mahesh gets ready as Sonakshi’s groom. Sonakshi reacts and injures him with a blade. Mahesh loses his cool. He tells her that she made a big mistake and compelled him to hurt her. He behaves rude and hurts her. He drags her to the mandap to forcibly marry her.

Sonakshi gets much hurt. She wants someone to help her. Mahesh tells her that none would help. Pooja confronts Rohit about his decision for Raima. Rohit tells her about Raima’s shocking move and his confiding with Sonakshi. Pooja misunderstands him. She really thinks that he wants to marry Raima. He asks her not to share the matter with anyone. Pooja doesn’t want to break his happiness. The wrong conversation falls in Raima’s favor. Sonakshi faces the bad time. Suman wants to meet Sonakshi. Raima avoids Suman. Sonakshi gets timely help from some kinnars. She will get saved from Mahesh’s trap.