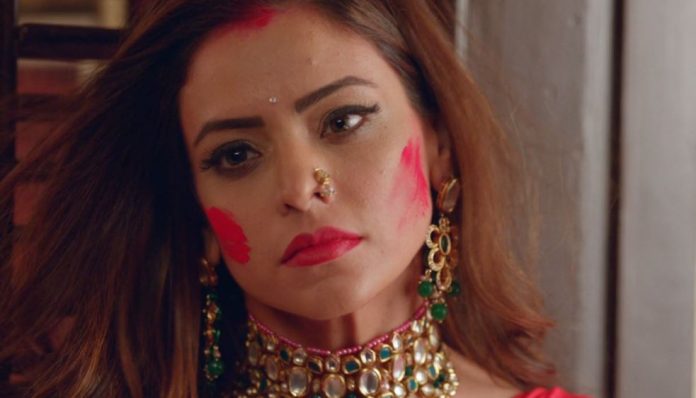 Kassautti Zindagii Starplus Komolika plans Prerna’s murder Anurag proves Prerna’s innocence by providing the CCTV footage of his office. Inspector tells him that the office staff had sent a different footage, maybe Prerna is being framed by someone. Anurag asks him to release Prerna on the basis of the real footage. Inspector lets him take Prerna with him. The charges on Prerna get down. Anurag gets into a moment with Prerna. He saves her again. She is grateful to him. He tells her that he had realized someone is after her, he doesn’t want her to fall in risk. He decides to keep her close with him as his shadow. She gets puzzled.

He hires her as his personal secretary so that none can harm her. He feels a sense of responsibility towards Prerna. He doesn’t know why he feels tending close to her. His heart makes him take the step. He tells her that she is very talkative and he saved the police from her. After some light moments, he decides to take her home for lunch. On the other hand, Komolika doesn’t know that Prerna got released. She assumes her to be in the jail. She gets well decked up for the Sindoor khela ritual.

Basus celebrate the Bengali tradition happily. Mohini feels proud to introduce her new Bahu Sonalika to the guests. The guests find Mohini a lucky person. They get complimenting Sonalika for her stunning looks. Komolika enjoys the fun. She asks Mohini to give some Sindoor as blessings to her. Mohini, Nivedita, Komolika among others become part of the rituals. Komolika goes berserk imagining Anurag. She gets in Anurag’s memories and gets the desperate feeling of wanting him right away.

Komolika plays with Sindoor, thinking just she has the total right on it. She declares that Anurag is just of her. She doesn’t want Prerna to return in their lives. It so happens that Anurag gets Prerna home. Prerna gets hesitant to step in. Anurag tells her that she has to visit his house often now for work purpose. Komolika gives good wishes to Tapur for her marriage. Nivedita wonders how did Sonalika do this. Komolika reads her mind and clears her doubts. Nivedita finds her very cunning. Basus find Anurag and Prerna coming home and walking over the sindoor fallen on the ground.

They get angry seeing Anurag and Prerna leaving the footmarks as newly wedded couple. Mohini gets angry on seeing Prerna. Anurag tells her that he insisted Prerna to come home for lunch. He tells that he had appointed Prerna as his personal secretary. This shocks Komolika. She angrily makes a leave. She vents her anger. She hates Prerna. She wants to kill Prerna to throw her out of their lives.

Anurag and Prerna finish the work. Anurag finds Moloy apologizing to Prerna. He wants to know what is Prerna hiding. Anupam tells him that Moloy is remorseful for Rajesh’s death. Anurag apologizes to her for their fate. Anurag insists to drop her home. She doesn’t want him to know about her bad situation. Anurag and Prerna feel that their fate is interlinked. Mohini doesn’t agree with them. Komolika plans to kill Prerna and also her baby in womb, to fulfill her revenge. Anupam finds Anurag happy with Prerna, than Sonalika. He decides to support AnuPre’s love story.