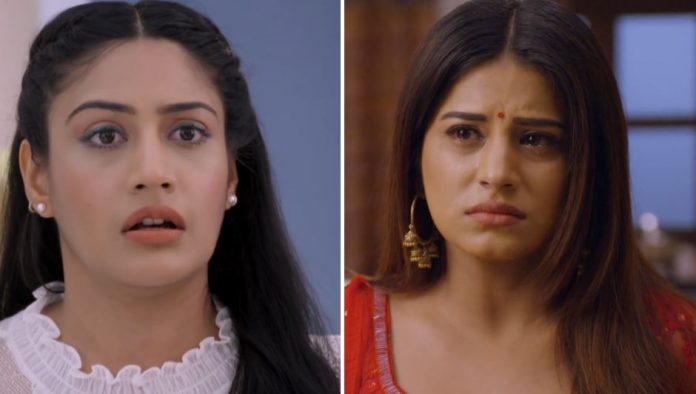 Nimki Vidhayak Sanjivani 2 Huge twists Upcoming Abhimanyu tries to sort out Nimki and Mahua’s fight. Nimki blames Mahua for breaking their bond. He asks them to forget things and move on. He wants the sisters to unite. Mahua angrily walks out. Abhimanyu explains him that there is a deep connection between relations and books, since both things are forever. He tells that even if blood relation breaks, it still stays, none can end blood relations. He tells that Nimki and Mahua will be sisters always. Mahua complains about Nimki. Sweety explains Nimki that Mahua needs her. Nimki feels she had tolerated everything alone. Sweety tells her that their bitterness will end the relation.

Nimki tells her that she has no time to mend relations. Sweety wants Nimki’s truth to be known to Mahua. She hopes that Mahua realizes Nimki’s pain. Abhimanyu tells that Nimki is good in hiding her pain. Tunne finds that Nimki is much filmi, her life is always influenced by films. He asks Mahua to share Nimki’s pain. Nimki tells Sweety that she will be hurt if Mahua is in trouble. Sweety asks her to forget annoyances and reunite with her sister. Abhimanyu asks Mahua to take an initiative so that their lives get beautiful. Parag is angered on Nimki and Mahua. He recalls the insult. He wants to kidnap Mahua.

Ganga learns that Mahua had insulted him. Pichku misleads Dadi by asking someone to talk as Mintu. He wants Dadi to stay happy. Mintu’s friends try to convince Dadi that Mintu is fine. Mahua takes the initiative to patch up with Nimki. She apologizes to Nimki. The sisters sort out their differences. Mahua wants their relation to stay strong always. Mahua gets kidnapped. Nimki is ready to do anything to save her sister.

Nimki Vidhayak Sanjivani 2 Huge twists: Ishani knows the pain Sid is going through. She doesn’t want him to blame himself. She is sure that someone is behind the conspiracy. Asha blocks their conversation. She takes Sid home. Ishani and Sid share a moment before getting away. Ishani doesn’t want Sid to get fired from Sanjivani. She wants to find the proof before the board meeting. Rishabh feels Sid is out of Sanjivani. He wants to become the best doctor of the hospital.

Sid sinks in guilt. He shares the bad happening with his family. Guddu curses the culprit, which angers Asha. She wants to use Guddu to trap Sid once again. She gets revengeful. Sid stays worried. He comes across a sick kid. He treats the kid. He wins praises by the chawl people. He gets confident once again. Ishani studies Sid’s cases. She gets all the data of Sid’s successful surgeries. She tells Rahil that Sid can manage to work without proper sleep, he can’t make any such careless mistake.

Rahil tells her that maybe someone had administered him drugs. Ishani feels the same. They decide to find out who had drugged Sid just before the surgery. Ishani meets Sid and finds him upset. She motivates him with new hopes. She wants him to be confident and not lose faith on himself. Ishani diagnoses the problem. She gets a striking thought. She realizes Asha had spiked the sweets to feed Sid. She wants to prove Sid’s innocence. Sid is summoned for the board meeting. Asha stops Sid from attending the meeting by using Guddu.

She misleads Guddu to make him out of the house. Guddu goes missing. Sid leaves the meeting to find Guddu. Asha makes the move to ruin Sid’s career. Asha knows that truth that Sid is actually Shashank’s son. Vardaan had shared the big truth with her and also his revenge motives. She gets selfish to ruin Sid for saving her own career.