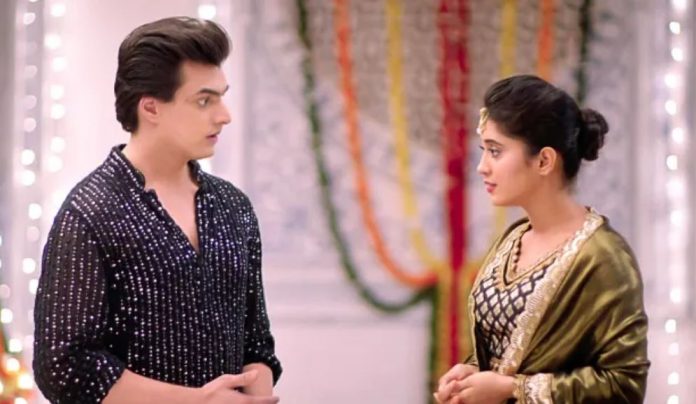 Yeh Rishta Starplus Kaira Vedika Complicated twists Kartik gets accused for Vedika’s kidnapping. Kartik gets confronted by the police. Pallavi files a complaint against Kartik and Naira for kidnapping Vedika. She tells the police that Kartik and Naira want to unite, and they have made Vedika out of their way. Inspector doesn’t listen to Kartik. He gets Kartik handcuffed. Kartik asks Inspector not to arrest Naira. He pleads his innocence. He tells inspector that he has no idea about Vedika’s whereabouts. The police gets Kartik humiliated in front of the media. Naira and Goenkas struggle to save Kartik from the wrong blames.

Vedika watches Kartik’s arrest. She feels helpless. Naira tries hard to save Kartik. Police drags Kartik to the court when Pallavi proves an evidence against Kartik. She makes Goenkas hear the phone recording. Vedika calls Kartik for help, while Pallavi gets mistaken that Kartik is responsible for it. Vedika’s ex is happy to see Kartik arrested. Naira gets Vedika to save Kartik from the punishment. Pallavi felt Vedika is kidnapped. She tells that she had got a call that Kartik has kidnapped Vedika. She doesn’t believe him.

Vedika runs to hug Kartik. The reporters ask Vedika where was she since long, did Kartik kidnap her. Kartik asks them how can they blame him without any proper proof. Vedika apologizes to Kartik. She is troubled by her ex. She wants to share the truth with Kartik. Kartik wants to know the matter from her. Naira has rescued Vedika and brought her on time. Vedika distances Kartik and Naira. Naira and Vedika will have a clash for Kartik. Naira will learn about Vedika’s ex, posing danger to Kartik’s life. Naira wants to protect Kartik, who still means her life.