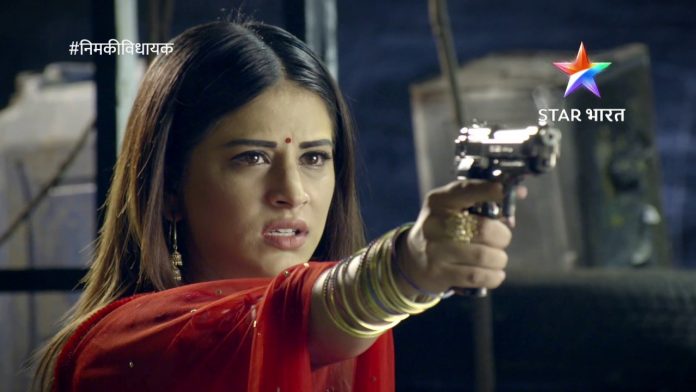 Nimki Vidhayak Guddan Zee Upcoming Spoilers Ganga informs Nimki that Mintu had kidnapped Mahua. Nimki wants to know the source of news. Ganga asks her to find source later and just save Mahua. She gives her the location. She tells that she still regards her close and that is why she is helping her. Nimki and Abhimanyu rush to the jungle to save Mahua. Mintu helps Mahua and takes her away from the goons. Ganga tells Parag that even if Nimki saves Mahua, the blame won’t come on him. Nimki looks for Mahua. Mahua gets hurt and faints down. The goons follow to kill them. Mintu tries to get Mahua to consciousness. Nimki thinks Mintu is Babbu Singh, who is ruining Mahua’s respect.

She calls him Babbu Singh and in no time, shoots him. Parag gets glad to watch this. He doesn’t want to spare Mahua. Abhimanyu is shocked to know that Mintu is Babbu’s lookalike. The family demands to know the truth. Nimki just wants Mahua to get fine. Nimki and Abhimanyu give the statement to the police. She didn’t think Mintu will get linked to her life. She loses faith in Mintu. She feels proud that she had shot Mintu to punish him for his heinous crime. Mintu’s friends ask her why did she shoot Mintu. They try to help Mintu. They praise Mintu’s character. They criticize her thinking.

Mintu has risked his life to save Mahua. Nimki misunderstands Mintu. She is mistaken that Mintu had kidnapped Mahua. Mintu gets hurt from the bullet. She gets Mintu arrested, but he is taken to the hospital for treatment first. Nimki rushes Mahua to the hospital. She is much worried for her sister. Mahua gets conscious. She tells Nimki that Mintu didn’t kidnap her. She proves his innocence. Tunne feels bad for Mahua. Nimki realizes her mistake. She can’t believe that she shot at Mintu without thinking once and listening to him. She wants to go to see Mintu. She wants to rectify her mistake. She goes to apologize to Mintu.

She comes across Mintu’s Dadi, who yells at Nimki for not valuing Mintu and suspecting him for no reason. Nimki faces Dadi’s wrath and feels she deserves it. Dadi slaps Nimki. She worries for Mintu’s life. Mintu is also admitted in the hospital. She tells Nimki that Mintu was just saving Mahua’s life. Nimki asks for her forgiveness. She sees Mintu in critical state. She wishes for his recovery. Abhimanyu feels Nimki has done wrong to shoot Mintu. Nimki and Mintu will be falling in love in the coming track.

Guddan and Akshat stay strong to fight their enemies. Their true love helps them conquer all the odds. They get into a romantic moment. Akshat confesses his love to Guddan. Alisha makes a big plan against them. She scares Parv and laughs on him for not being daring. She wants Guddan out of Akshat’s life. She asks Parv to keep the gun safe and not let Guddan find it. She asks him to use the gun in the party. He finds her plan dangerous. She doesn’t reveal whom she wants to kill. Guddan checks for the gun by a metal detector. Parv hides the gun to get saved from Guddan.