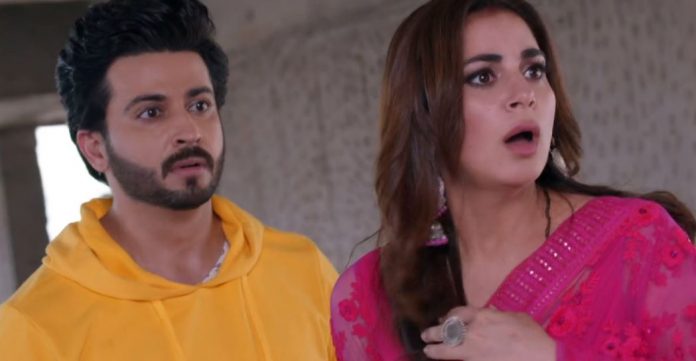 Kundali Bhagyya Today Shocker for Karan Preeta lined Preeta apologizes to Mahira on Karan’s behalf. She wants to save Mahira and take her away from the danger. Mahira doesn’t want to talk to her. She goes away from Preeta. Preeta continues to search for her. Karan looks for them in the building. Preeta tells Mahira about the danger because of the weakened bamboos. She asks Mahira not to touch any bamboo and walls. She alerts Mahira. Meanwhile, Sameer feels Karan and Preeta have no love between them. Shrishti feels they are meant to be together. Sameer yells at her and makes her cry. He consoles her. He apologizes to her. She wants to tell him that Preeta didn’t send any notice to Luthras.

Shrishti tells Sameer that Karan has love in heart for Preeta, she has seen his love in his eyes. She convinces Sameer to help her. He asks her plan to unite Preeta and Karan. She tells him that they have to execute their plan on the engagement day. She wants Mahira to back out from the engagement and hurt Karan’s ego, so that Karan doesn’t consider marrying anyone. Sameer feels Mahira loves Karan a lot. She wants Karan’s soul mate Preeta to stay as Karan’s wife. She shares her plans with Sameer. He is stunned on hearing the impossible thing. She is sure to make it possible.

Mahira feels Karan has come to save her. She gets upset when she hears him shouting Preeta’s name. She realizes that he loves Preeta and had come just for Preeta. Karan angrily scolds Preeta. He asks Preeta why is she risking her life. Preeta tells him that he is really bad and made Mahira cry. She tells that she had come to save Mahira. She wants him to apologize to Mahira. Karan asks Preeta not to teach him anything. Preeta is hurt on talking to him. Karan warns Preeta. He makes her jealous by telling him about his engagement with Mahira. Mahira overhears their conversation. Karan insults Preeta after showing concern for her. Preeta isn’t affected by his hatred. She wants him to find Mahira and get away.

Karan and Preeta’s argument goes on further. Preeta reminds him that she is his wife. Mahira thinks to check on them. She gets trapped in the bamboos. The ceiling falls over Mahira. She gets much hurt under the debris. This leaves Karan and Preeta shocked. Elsewhere, Sarla wants Prithvi to marry Preeta. She apologizes to him for the insult he faced. She tells him that Preeta didn’t knew about Karan sitting as the groom in the mandap. She wants him to forget the past. Prithvi gives his word that he will marry Preeta. He is tensed knowing Sherlyn is overhearing his conversation. Sherlyn stops him from making any commitment to Aroras.

He is scared of her reaction. He gets stuck in the situation. He ignores Sherlyn’s call. Sherlyn angrily reacts. Prithvi goes to pacify her. Sherlyn reprimands him for thinking to marry Preeta again. Sarla feels he is really a nice guy. She praises his good values. Moreover, Mahira calls Karan for help. Preeta guides Karan to save Mahira. Preeta saves Karan from getting hurt. They have a romantic moment during the tensed situation. Karan saves Mahira. Preeta feels jealous seeing their hug. Karan’s friend gets the rescue team for them.

Karan asks Preeta not to expect their togetherness again. Preeta gives him a solid reply. She doesn’t want Karan to stalk her. She asks him to look after his would be wife and keep her happy. She wants him to respect women. He wants her answer about the notice. She denies to know about it again. He feels she is lying. She asks him to believe whatever he wants. She tells him that she is eagerly waiting to get rid of him.