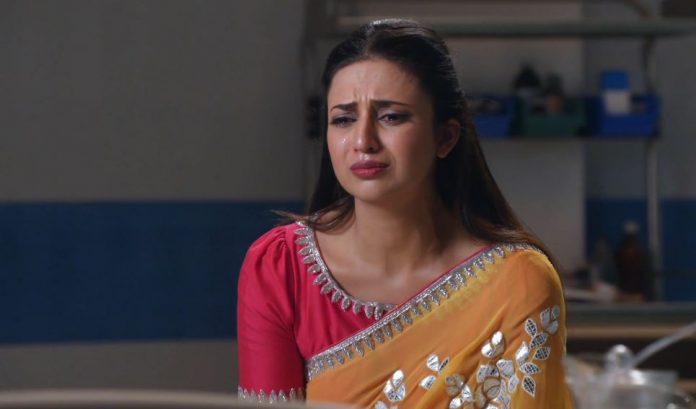 Yeh Hain Mohabatein Secret revelation of IshRa Ishita calls inspector Sharma home to interrogate Arijit. Shardul messages Arijit, asking him not to come to Bhallas else he will be be confronted by the police. Arijit misses to see the message. Sanjay finds the police and informs Arijit that its risky to meet Bhallas at this time. He tells that police has been called just for him. Arijit checks Shardul’s message. He acts careful. He takes the actress with him. The actress thinks if police is involved, then its really a risky matter. She refuses to play Namita’s role. Arijit asks her not to worry and just come along, he will explain her Neeti’s scenario.

Arijit gets saved from the police, who is waiting for him in Bhalla house. Shardul tries hard to send the police away. He shows concern for Neeti. He tells the inspector that Neeti had undergone mental trauma and she may not be able to react normal if she gets interrogated. He asks them not to trouble Neeti and just interrogate Arijit at the right time. He tells Ishita that they should not trouble Neeti. Ishita tells that Neeti’s sessions with a psychiatrist is already going on. She asks inspector to talk to Neeti’s psychiatrist if he wants to know about Neeti.

Shardul feels Ishita is secretive since she is hiding a lot of things from him. He had no idea that Neeti is meeting a psychiatrist. He tells inspector that Arijit is coming to discuss the project in some time. Inspector tells him that he has left a constable at the building, Arijit will be arrested if he commits a mistake. He waits for Arijit for long. Inspector tells Ishita that he will interrogate Arijit at a later time. Ishita and Karan think if anyone messaged to alert Arijit. Shardul doesn’t want them to suspect him. He misleads them cleverly. Mihika tells Ishita that Neeti is much upset.

Ishita is sure that art is something that Neeti enjoys. She knows that Neeti will make new drawings to help them find her background. Shardul secretly meets Neeti when Mihika is away from her. He doesn’t want anyone to see him with Neeti. He tells Neeti that he would like to take her to Arijit, but he is helpless until Arijit’s revenge gets fulfilled. He loves Neeti as his own daughter. Bhallas celebrate Bhaidooj. They decide to do charity and earn good deeds, while celebrating with the old people at the old age home. Ishita finds it a novel idea. She also wants to get happiness in the form of blessings from old age home people.

She tells Shardul that they shall also accompany the family. Shardul agrees with her. Ishita asks him to sign a cheque on Raman’s behalf so that they can make a donation. Ruhi surprises the family. She tells them that she had come early than expected just to celebrate Bhaidooj with Yug. Karan gets happy to meet Ruhi after long. Yug thanks Ruhi for considering his wish and coming back. Ruhi celebrates Bhai dooj with Yug. Shardul tells Ishita that he urgently needs to meet his friend. Ishita asks him to go after Simmi completes the rituals. Shardul feels more than lucky to celebrate Bhaidooj with Simmi, since he is playing Raman’s role.

Karan tells Aaliya that since he has no sister, he wants to make her his sister and celebrate Bhaidooj. Aaliya and Ruhi get the gifts from their respective brothers. Shardul tells that he missed to get a gift for Simmi. Ishita misses Raman badly. She gifts Simmi on Raman’s behalf. Shardul gives sweets for Neeti. He asks Mihika to hand it over to Neeti. He doesn’t want to meet Neeti, since she may recognize him.

While the family goes to the old age home, Ishita drops Shardul at the cafe for his meeting. She then heads to the secret place where she is getting Raman treated with the help of Sudha’s hospital staff. She requests Raman to gain consciousness and join the family. She tells how much she needs him to gain strength. Sudha sympathizes with Ishita. She asks Ishita to keep courage and pass the last test of love. Ishita’s love will revive Raman.