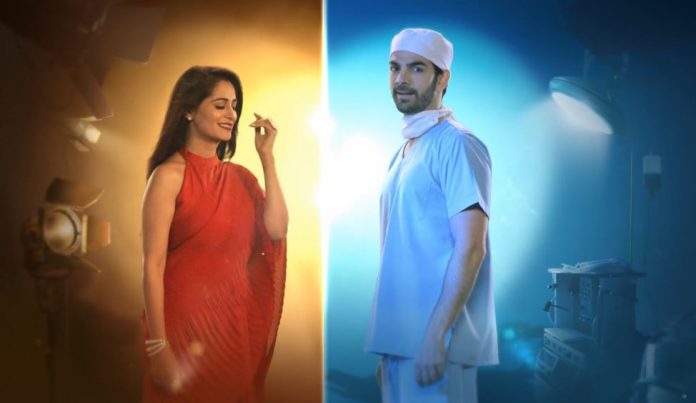 Kahaan Hum Today Starplus Drama Romance Tussles Rohit’s family spies on him to know about his nuptial night. They are afraid that he has fallen asleep, since he was feeling sleep at the time when he was checking Rohan. They don’t want Rohit to ruin the name of Sippy men. Deepa and Pooja don’t want the men to do anything mad. They ask them not to spy on Rohit’s progress. While their argument goes on, they fall inside the bolted door. They get inside the room and find Rohit and Sonakshi fallen asleep on their first night. This makes them click their cute picture so that they can pull the couple’s leg in the morning. They think Rohit proved that he is much boring and Sonakshi is not happening either.

Meanwhile, Suman misses Sonakshi at home. She wants Pari to follow Sonakshi’s footsteps and make her good career. She asks Pari to stop waiting for bagging movies and instead join any good tv show. She wants Pari to become famous. Sonakshi works out in the morning. Pooja joins her. She finds Sonakshi energetic. Someone unknown clicks their pictures. Sonakshi doesn’t realize this. She goes to wake up Rohit. They have cute fun, while they laugh on missing their first night. Sonakshi gets into Parvati mode.

She gets serious about her First rasoi ritual. She wants to make breakfast for entire Sippy family according to their choices. She seeks help from Suman also. The family likes the food and praise Sonakshi. Ajit teases Rohit and sends the last night’s picture in the family group. Rohit and Sonakshi get embarrassed by seeing their picture. Rohit comes across Naren and gets upset. Sonakshi observes this. She makes Rohit greet Naren with love. She finds the situation weird, since father and son can’t be formal. Rohit listens to her and greets Naren nicely. Veena is pleased to see Sonakshi bringing Rohit and Naren closer. Raima feels ashamed of her mistakes.

She loses courage to meet Sippys. She collects her belongings from Sippy mansion. Sonakshi forgives her. She tells Raima that Rohit and she will always look after her. She is angry that Raima wanted to cheat them. She clears out that Rohit is her husband and Raima can’t be after him. She handles the situation well without hurting Raima’s heart and also making Raima realize her mistake. She asks Raima to stay in contact. Rohit overhears their conversation. Raima thanks them. Rohit feels Sonakshi has handled Raima really well.

On the other side, Veena gets angry when an agent Jitesh calls her and asks Sonakshi’s rate for a performance. She calls Suman to complain her. Suman feels its a normal thing, Jitesh talks in that language, but he gets good deals for Sonakshi. She tells that Jitesh would be asking Sonakshi’s fees for the appearance. Veena is angry that Suman is taking such an insult so lightly. She vents out her feelings, since she is concerned for Sonakshi’s dignity. She ends up speaking rudely to Suman. Suman calls up Sonakshi to complain about Veena. Sonakshi wants to balance her new and old relations.

She is glad that Veena is so protective about her. She tells Veena that she feels fortunate to get a strong, bold and protective mother-in-law. She tells that she used to handle such things all by herself, since Suman used to look after the younger children. She feels Veena is supportive of her. Veena gets impressed by her mature talks. She thinks to apologize to Suman. Sonakshi assures that she will handle Suman. Veena praises Sonakshi’s values. Sonakshi gets into a new trouble when she gets stuck between her work and in-laws duties. Will Sonakshi prove out to be a perfect bahu like Parvati? Keep reading.