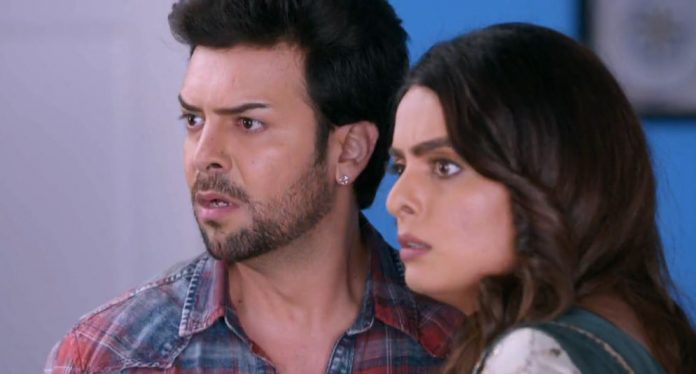 Kundali Bhagyya Prithvi Sherlyn Huge drama tonight Mahira apologizes to Karan. He feels hurt because of Preeta. He hides his emotions from Mahira. Prithvi asks Sherlyn not to expose their relation in front of Sarla. She warns him against marrying Preeta. She tells him that she will not let him cheat. She threatens of exposing all his crimes if he agrees to Sarla’s request. Prithvi calms her down. Sherlyn asks him to refuse for the proposal. He feels stuck. He didn’t wish Sherlyn to come between his desires for Preeta. He wants to marry Preeta. Sherlyn commands him to obey her. She tells him that if he goes against her and marries Preeta, then he will be exposing himself.

He doesn’t want her to threaten him. She trains him to go and insult Preeta. He tells her that he can’t insult and show hatred for Preeta. He asks Sherlyn not to take his love test. He promises to refuse for the marriage. Sherlyn angrily slaps him. He can’t even react since Sarla and Janki are also at his house. Janki hears the slap sound. She tells Sarla that she will go and see who had slapping whom. Sarla stops her from spying. Prithvi asks Sherlyn the reason for the slap. She gets jealous seeing his madness for Preeta. He lies to her again that he just loves her. Sherlyn doesn’t want him to lie. He confesses love to her.

She wants him to tell Sarla that he really hates Sarla. He has to keep his good boy image in front of Sarla. Janki gets suspicious, knowing he isn’t a good man. She goes to spy on him. Prithvi tells Sherlyn that Sarla will doubt on his fakeness if he changes his words. Sherlyn hugs him with love. Janki gets close to see Prithvi and Sherlyn together. She misses their moment because of Sarla. Prithvi gets tensed. He tries to handle Sarla and Janki. Prithvi clears Sarla’s doubt. He lies to her that his mom slapped him when he said he wants to marry Preeta. He makes stories and eventually comes to the point that he can’t marry Preeta.

He tells her that he can’t go against his mom. Sarla understands his obedience. She tells him that she will meet his mom. He worriedly makes excuses. Rakhi happily laughs after a long time because of Ramona. Dadi and Kareena also spend good time. Ramona meets Karan. She is happy that Mahira is going to marry Karan. Rakhi finds Karan upset. Mahira tells them about her visit to Karan’s club and putting herself in danger. She tells that Karan and Preeta saved her life. She alerts Kareena so that she keeps Preeta away. Karan tells the family that he goes to the club to play cricket, while Preeta is the team’s physiotherapist.

Ramona wants to know why is Karan giving importance to Preeta. Mahira handles her. Kareena is sure that Mahira will manage their family well. Rakhi looks for Sherlun. Kareena tells Rakhi that Sherlyn had gone for shopping to surprise Mahira.

Prithvi tells Sherlyn about Sarla’s wish to meet his mom. She learns the big problem. He tells her that he can’t tell them about her presence. He asks her to give him some idea to handle them. Sherlyn asks him to make any excuse. Sherlyn gets an invite from her friend. He thinks to take advantage of her absence. He asks Sherlyn to go and enjoy the party. He wants to meet Preeta. He is sure Sherlyn won’t know about it. Ramona gets shocked to know Karan is already married. Sonia too learns the truth. Mahira doesn’t want to share it with her friend. Ramona doesn’t want Mahira to marry Karan.

She stops Mahira from getting into a wrong relationship. Mahira tells her that Karan and Preeta’s marriage isn’t known to anyone. She begs Ramona to let her marry Karan. She loves Karan a lot. Ramona asks her to understand that Karan is a married man. Mahira has no problem with Karan’s old relationship. Ramona wants to call off the relation by taking to Rakhi. Mahira convinces Ramona and Sonia to happily become part of her marriage. Prithvi tells Sarla that his mom is much upset, she won’t talk to them. Prithvi makes a plan to marry Preeta.