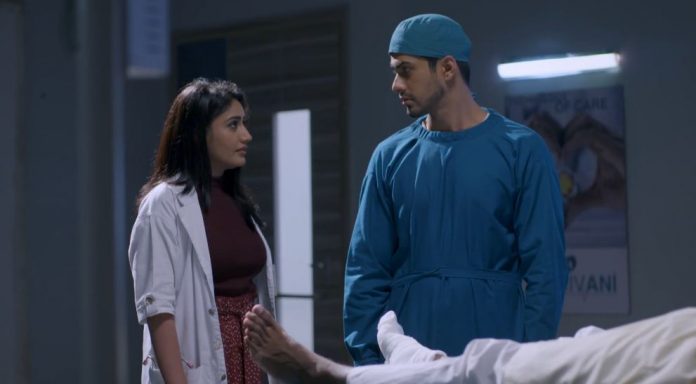 Sanjivani 2 Starplus Ishani Sid counter Vardaan Asha evil Ishani gets doubting Asha for framing Sid. Sid asks Ishani to make a leave from the OT so that Vardaan doesn’t catch them together. He doesn’t want Ishani to risk her career by supporting her. Ishani stays outside the OT on his insistence. She finds Vardaan and makes a plan. Vardaan tells Asha that its time that he goes to the OT and catches Sid red-handed. He is sure that he will be able to defame Sid for his secret surgery and then kick out Sid from Sanjivani forever. He goes to check on Sid. He gets a shock when he doesn’t find Sid anywhere in the OT.

He finds Ishani instead Sid. He can’t believe that Sid had made a leave to trick him. He tries to expose Sid’s plan, but fails. Ishani tells Sid that she had seen Vardaan and alerted him in time. She assists Sid in the surgery after Vardaan leaves. Vardaan fumes on failing to catch Sid. He tells Asha that she has failed to keep Sid and Ishani away. He feels she is useless and tells her that she won’t be assigned any surgeries to boost up her career. Asha gets revengeful against Ishani, who always saves Sid.

Sid completes the minor surgery and hopes that Utsav recovers. He tells Ishani that the medicines will heal the wound internally and the amputation of the leg won’t be needed. Ishani gets glad that Sid had saved Utsav’s leg. She hopes that the medicines start working soon and Rishabh changes his decision of amputation. Vardaan wants Rishabh to perform the amputation even if Utsav’s wound is healed. Rishabh follows Vardaan’s orders. Ishani gets worried what Rishabh is still insisting to amputate the leg. She requests him to give some time until the infection gets off. Sid is worried about the outcome of the surgery.

He wants to get some news of Utsav’s condition. Ishani breaks the good news to Sid that Utsav is recovering, Rishabh had cancelled the amputation process. She tells Sid that he is one of the best doctors in Sanjivani, Shashank would be proud of him. She thanks him for saving Utsav’s future. They have some romantic moments. Sid doesn’t want her to go away. She reminds him that he is Asha’s husband now. They feel the pain of losing their togetherness. Asha tells them about Vardaan learning Sid’s move.

Ishani questions her about not stopping Vardaan in time. Sid and Ishani question Asha further. Asha makes excuses and falls in Ishani’s suspicion. Ishani shares her doubts with Rahil. She feels Asha has joined hands with Vardaan against Sid. She wants to know the motive of Asha’s hatred for Sid. Rahil asks Ishani to confide the truth to Sid. Asha blocks her again. Ishani reveals Asha’s dark truth to Sid. Will Sid trust Ishani or Asha? Keep reading.