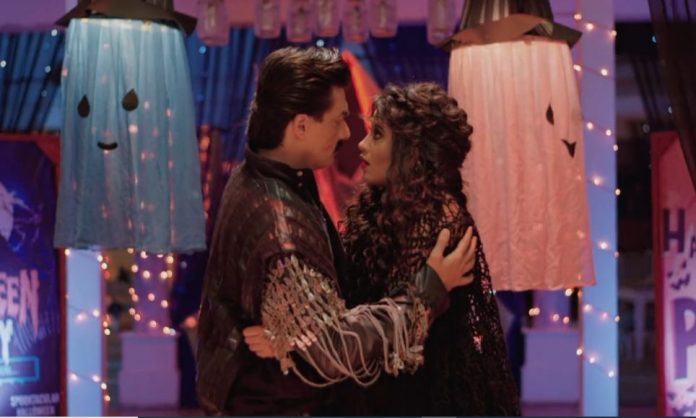 YRKKH Starplus Kartik Naira Huge shocker awaits Goenkas Goenkas Kartik battles with his feelings for Naira. Kartik tells Suwarna that none has the cure of his emotional breakdown. Suwarna feels sorry for the situation in which fate has put Kartik, Naira and Vedika, where none of them is wrong. Suwarna doesn’t know that Vedika is hiding about her past relationship. Vedika gets a shock when Akshat tries to claim his rights, being her ex-fiance. He reminds her their relation, which she ended abruptly. Vedika broke off with him knowing his criminal connections. She didn’t wish to continue her relation with him after knowing his crimes. Akshat still madly loves her.

But, he loves money more than her. He tells Vedika that he is ready to forget her and will let her move on in life with Kartik only if she helps him in getting some of Goenkas’ richness. He tells her that he will not go from Goenka house and stay back with the good family until Vedika gives him more than sufficient amount. Vedika gets worried on his threatening. She wants him to leave the house soon. Akshat turns greedy. Naira spots them together and thinks if they have any connection. Vedika cleverly tricks Naira and hides the truth.

Akshat too misleads Naira so that he can stay there for long. He doesn’t want to tell his plans to Vedika. Vedika had given him her dad’s richness already. He wants to loot her in-laws as well. She asks him not to rob Goenka house. Akshat threatens to reveal about their past again and again. Vedika gets speechless. Naira rushes to Kairav, when the latter gets scared of a bad dream. He tells Naira that someone was taking him away from her. Akshat really plans to kidnap Kairav and demand ransom from Goenkas. He thinks Kairav is the jackpot. Naira doesn’t think Kairav can become someone’s target. She relieves his worries and makes him sleep.

Kartik is happy that Kairav is living with them, and Vedika isn’t opposing Naira’s stay. He gets mesmerized every time he sees Naira. The family acts on Kairav’s words. They don’t wish Vansh on his birthday only to work out Kairav’s surprise plan for Vansh. Vansh thinks no one remembers his birthday and gets disheartened. He complains about them to Gayu and Samarth. He feels Kairav has snatched everyone’s love from him. Gayu sympathizes with him, while Samarth loses his cool, since he doesn’t regard Vansh as his son. Kairav tells the family that Vansh will like the surprise party. He plans the halloween theme party as per Vansh’s choice.

The Goenkas doesn’t agree for the scary theme, but Kartik and Naira find the idea very creative. They both turn into kids and get ready to support Kairav’s idea. Kairav convinces everyone for the theme. Akshat is glad to get a chance to kidnap Kairav from the party. He thinks the costumed party will give a chance for his goons to make an entry. Vedika wants Akshat to leave. He tells her that he has found his target by which he can get much rich. Vedika fails to understand his kidnapping plan. Akshat forcibly hugs her. Naira goes to help Akshat. Kartik accompanies her and can’t help looking at her.

She asks him not to make it odd for her. He tells her that now that she is at home, he can’t stay without her. Naira doesn’t want Kartik to have any wrong hopes. They meet Akshat, while Vedika hides from them. Akshat tells Kartik that he wants to go home, since he is feeling better. He lies about his family. Kartik permits him to go only after attending the party. Akshat agrees to Kartik’s request. Kartik and Naira have a moment while they make the party arrangements. They think of their fate, their togetherness and separation. Kartik can’t control his feelings. He goes on praising her beauty.

After they get ready into their chosen fancy costumes, they crack jokes on each other’s choice. They laugh on each other and end up arguing, but with a romantic moment in making. Kartik wishes her to be part of his life again. Kartik, Kairav and Naira surprise Vansh on his birthday, while Akshat plans Kairav’s kidnapping.