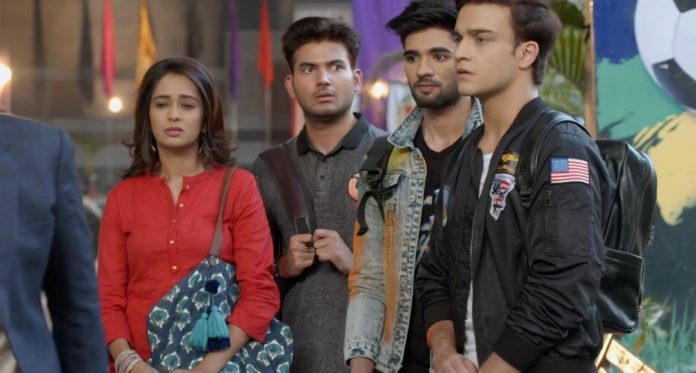 Kumkum Bhagyya Ranbir Prachi counter weird twist Ranbir gets worried about Dheeraj. He wants to get help from Aryan. Aryan is more than willing to help. Priyanka wants to know why isn’t Rishi arrested. She wants Abhi to take action against her. Priyanka speaks to the receptionist. She learns that women who have some problems in their lives come to stay in the lodge. Priyanka lies to her that she is finding her twin sister, who is in a troubled relationship. She doesn’t want to get caught. She thinks to leave from the lodge. She hopes that Omi brings out her suicide news and get Rishi arrested. Shahana asks Rishi why does he look worried. Rishi shares his big trouble with Shahana.

He tells her that he is framed in Priyanka’s suicide case. She can’t believe it. He tells her about Priyanka’s blames for molestation and suicide. He feels he is badly trapped because of Priyanka. Shahana sympathizes with him. He feels he made a big mistake by going to meet Priyanka. She asks him not to worry, truth will eventually come out in front of Abhi. She is sure that Abhi will support him once the truth comes out. She asks him to trust Pragya. She shows her belief on him. He is worried that Pragya’s health is getting spoiled because of his problems.

Ranbir tells Aryan that he wants to help Dheeraj. Aryan feels bad for Dheeraj. Ranbir makes a plan to help Dheeraj. Aryan wants to know his plan. Ranbir makes a plan to steal the question papers and pass it to Dheeraj so that he tops the college. Aryan doesn’t want to do this. Ranbir convinces Aryan by stating that they are friends and more like brothers. He makes Aryan emotional. He makes a wrong plan to help Dheeraj. Ranbir gets weird like always, when it comes to understand someone’s advice. He thinks stealing the papers would help Dheeraj. He is ready to take the big risk. Prachi takes care of Pragya. Pragya is glad that she is getting mature.

She asks her to share her problem. Prachi doesn’t want to give her stress. She asks Pragya not to worry. Pragya insists her to share the matter upsetting her. Prachi just informs about Sanju. She doesn’t tell how badly she was caught in an odd situation. Pragya asks Prachi to attend classes. Sarita asks Pragya about her illness. She wants to know what’s troubling her heart. Rishi knows Pragya is stressed because of her. Priyanka doesn’t find the news again. She gets upset. She calls Omi to ask him about the missing news. He tells her that he can’t believe her news. He wants an evidence so that he can print the news.

She tells him that Priyanka is Abhishek’s niece. He asks her to send the photos of Rishi also. She tells him that she will arrange the evidences and photos. She is sure that Omi will publish the news once he sees the photos. Pragya lies to Sarita about the tension. Sarita understands that the matter is something else. She doesn’t want to force Pragya to share it. She asks Pragya to just take it easy and not sink in stress. Rishi apologizes to Pragya for making her worry so much. Pragya wants to keep hope. She asks him about Priyanka. Ranbir gets modest while he speaks to the principal. He sounds rude. Prachi asks Ranbir not to talk to the principal in a bad way.

Principal asks them not to get inspired by Ranbir. He asks Prachi and Aryan to work hard to get good marks. Principal warns Ranbir. Aaliya wants Purab to reach the party venue on time. Purab doesn’t pay attention to her. Abhi tries to ask the Inspector about Priyanka. Abhi wants information about Priyanka. He feels Pragya is supporting the wrong and got away from him because of Rishi.