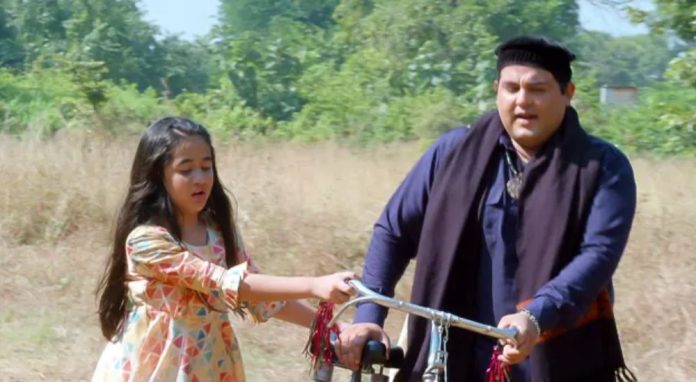 Kulfi Kumaar Bajewala Today Kulfi makes risky declaration Kulfi gets puzzled seeing Tuntuna in the disguise. Tuntuna tells her that he might fall in trouble if anyone sees her with him. He asks her not to call him by name. She goes to call Sikandar. He asks her to talk in low tone. He doesn’t want the telephone operator to suspect her. She fails to connect to Sikandar. He tells her that he will make her board the bus for Kartarpur, where she can meet her known people. The men see Tuntuna and suspect him for taking the girl in a hurry. They suspect that Tuntuna had kidnapped the girl. Before they could call the police, Tuntuna runs away. Kulfi gets tensed to be left alone.

A man informs the inspector that Kulfi is known by the village people. He doesn’t think she is an Indian. Lovely gets frustrated. Amyra relieves her. Lovely finds a cockroach in the room. Amyra deals with it. Lovely didn’t know Amyra has learnt many things. She thinks what had happened to Amyra suddenly. She thinks Amyra had turned bold and also sensible. She doesn’t know if she should be happy with this change or not.

She thinks Amyra is becoming a chawl resident. The men drop Kulfi to Tuntuna’s house. Tuntuna asks Kulfi not to tell anyone that she is an Indian. He tells her that she doesn’t know how people change behavior knowing about background. She thinks its not a big deal. He tells her that she will be shot if she goes to cross the border. Her innocent questions leave him puzzled. She tells him that she will go to Kartarpur on her own. She misses Sikandar. Tuntuna feels guilty to argue with her and let her go alone. He stops her and apologizes. He assures that he will accompany her to Kartarpur. He convinces her. He takes her to his vehicle.

She was expecting it to be a high speed car, but she finds a cycle. Sikandar gets searching Kulfi. He asks few people about her. Tuntuna takes Kulfi with him. He takes care of her. She gets emotional. She gets fresh fruits for him. He gets surprised by her efforts. Some men come there and confront her for being an Indian. Tuntuna lies to them. Kulfi admits that she is from India. Tuntuna gets panicking that she is ruining everything. Sikandar becomes a suspect when he comes across the cops.