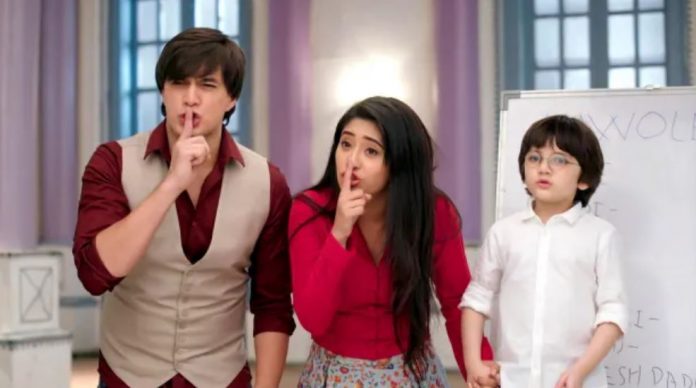 Yeh Rishta Upcoming Kairav kidnapping Huge twists Kartik and Naira enjoy their time in Vansh’s birthday party. The ones who were opposing Kairav’s idea about the Halloween party get happy and like the party a lot. Everyone takes up the scary avatars. They become dark characters like the vampires, spirits and ghosts. Kairav asks everyone to look their worse as per the theme. Everyone looks scary and gets pictures clicked. Kairav and Vansh also become little vampires. Vansh tells Kartik that he felt everyone forgot his birthday. Kartik tells her that none can forget his birthday. Vansh loves Kartik a lot. Kartik tells him that this is actually Kairav’s idea to throw a surprise party, for doubling their happiness. Kartik compliments everyone for their scary looks.

Dadi shows her convincing look of a witch. Everyone compliments Kartik’s Dadi. Kartik can’t stop praising Naira. He keeps following Naira. He is falling in love with Naira again. His feelings for her are growing with time. It gets evident for Naira. He can’t control his emotions. Naira can sense his emotions and distances herself. She doesn’t want Vedika to sense this and get upset. She avoids Kartik. He gets more after her in desperation. Akshat takes the pirate look. He gets his goons in the disguise of human skeletons.

The goons get mixed up with the party guests. Akshat instructs his goons to kidnap either of the two kids. He wants to kidnap Kairav, knowing he is Kartik and Naira’s world. He knows they can pay any amount for freeing their son. He gets Kairav kidnapped. Kartik and Naira look for Kairav when they find him missing in the party. They ask Vansh about him. Vansh tells them about Kairav going to dance. Naira finds everyone dancing, and Kairav still missing. She asks Kartik to find Kairav. They look for Kairav in the house. Will Akshat succeed to kidnap Kairav and threaten the Goenkas for a hefty ransom? Will Vedika expose Akshat’s crime after knowing the risk on Kairav’s life or keep silence about it to veil up her past? Keep reading.