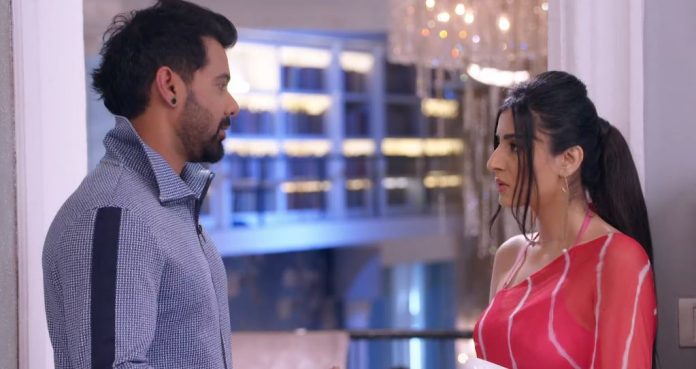 Kumkum Bhagya Upcoming Today Abhi Meera bond Meera tries to take care of Abhi and relieve his tensions. She asks Abhi if he is worried about Priyanka. She doesn’t want to trouble him further. Abhi shares his tensions with Meera. He tells her that he doesn’t share things with her, since things get awkward. She doesn’t want him to feel compelled to share anything. He regards her a part of his family. He is thankful to her for raising Rhea like her mother. He knows that she is a genuine person, a positive spirit, who has kept his family bounded together. She asks him if he is upset for some fight with Pragya. She wants him to reconcile with Pragya.

She asks him not to get ego between them. Abhi tells her that situation is separating them. He confides the ugly matter. He tells her about Priyanka’s molestation. He tells that Pragya is supporting Rishi, and claiming that Priyanka is the obsessed lover. He shares about the court battle and Priyanka’s suicide attempt. He feels Priyanka isn’t wrong. He is upset that he lost Priyanka and even then Pragya is supporting Rishi. She asks him to do whatever he wants. She finds him right. He was confused that he is wrong. She worries for Priyanka.

He tells her that he took Priyanka’s side, since she was his responsibility. He wants Rishi to get punished. She promises to keep the matter a secret. Meera feels bad for Abhi. Meanwhile, Ranbir gets scolded by the principal. Prachi asks him to meet the principal. Ranbir doesn’t want to hear the lecture again. He tells her that he has to meet his friend at the hospital. He tells that his friend is scared of exams. Prachi accompanies him. Abhi doesn’t wish to justify Pragya. He cries that Priyanka is no more. He doesn’t know Priyanka is plotting everything for revenge. Vikram tells Abhi that he got a new phone for him and also messaged Anuradha.

Abhi tells him that he will just love Pragya all his life. Dheeraj had committed suicide due to the exam stress. His mum gets upset with him. Ranbir and Prachi visit him. They realize Dheeraj’s big mistake. Ranbir pacifies Dheeraj. He asks Dheeraj to value his life and mother. Ranbir learns Dheeraj’s side of story. Ranbir consoles his mum. He makes Dheera realize his mistake. Prachi doesn’t want Ranbir to scold Dheeraj. Ranbir doesn’t calm down. He feels bad seeing Dheeraj’s mum in tears. He can’t see any mum in sorrow. Prachi tells him that his scolding won’t help Dheeraj.

She asks him to help him in studies and solve his problem. She wants him to understand Dheeraj’s state of mind and try to help. Ranbir understands her point. Priyanka tries to know if Rishi got arrested. She calls up Rishi. She realizes that he is still free. Rishi tells Pragya about the blank call. He tells Pragya that Priyanka would have called him to know if he is arrested. Pragya believes him. She asks him to call back on the number and ask the person. She learns that a girl had called on Rishi’s number. She tries to know Priyanka’s location. She tells Rishi that Priyanka is alive. She wants to inform Abhi. Rishi wants to find Priyanka first and then inform Abhi.