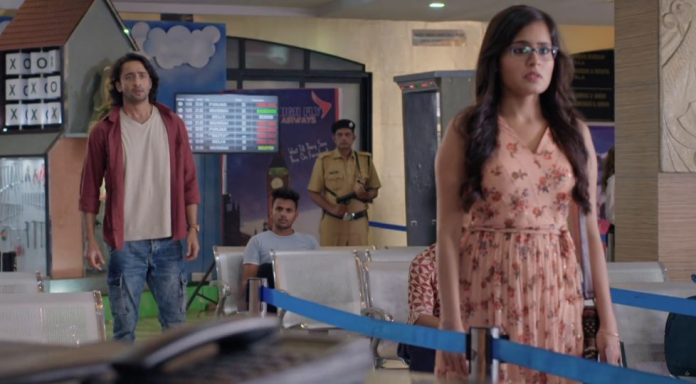 Rishtey Pyaar Today Abir Mishti final separation moment Mishti breaks down after meeting Abir and failing to convince him. She gets support from Vishwamber and Rajshri, who love her as their own child. Meenakshi dumps Mishti’s painting. Abir gets the painting and saves it. He gets it back to his room. He doesn’t want to sacrifice his love signs. Parul feels Meenakshi has done wrong to snatch Abir’s love. She asks Meenakshi to realize her mistake. Parul tells Meenakshi that Abir has already lost Mehul by knowing his truth, Abir needed Mishti at this time. She asks Meenakshi how could she not let Abir live happily with Mishti.

Meenakshi finds Mishti a misfit in her house. She tells Parul that time always asks a person to make sacrifices, like she has made sacrifices in the past, Abir has to make sacrifices ion the present. She is sure that Abir will respect her decision some day. Parul doesn’t think Abir will agree to him. Abir tells Meenakshi that he will never regret to love Mishti. He tells her that Mishti will always be in his heart. Kunal fears that Abir has gone somewhere. Abir assures him that he will not go anywhere. He tells Kunal that he has much work. Meenakshi blesses them and is happy.

Mishti shares her sorrow with her family. Kuhu surprisingly supports her, having gone through the same pain. Mishti and Kuhu suddenly break down when she act strong in front of the family. Mishti gets a new direction in her life when Vishwamber decides to send her to London to join Nannu’s NGO work. Mishti agrees to go away. She doesn’t want her family to stay upset because of her. She knows she will be moving on with ease if she goes away.

She asks Kuhu to respect herself so that others respect her. She encourages Kuhu as well. Abir meets Vishwamber and learns that Mishti is going away from Rajkot. Mishti expresses a wish to visit the temple. Vishwamber allows her. She finds Meenakshi there. Meenakshi does some charity to fulfill her prayers made. She has got both her sons, without their life partners. Vishwamber vents anger on Abir. He tells Abir that Mishti will soon learn that she is herself responsible for her own happiness. He doesn’t want Abir to feel like a winner. He makes Abir realize that he is nothing in Mishti’s life.

He wants to keep Mishti away from Abir. Abir loves Mishti a lot and wants to see her once before she goes away. He wants Mishti to stay strong. Meenakshi insults Mishti. She faces Mishti’s curse. Mishti curses Meenakshi to lose both her sons. She feels Meenakshi is a terrible mother. She doesn’t leave the chance to insult her. She feels Meenakshi doesn’t deserve a son like Abir. Meenakshi admits to manipulate Abir and break Mishti and Abir’s relation.

Mishti feels pity that Meenakshi couldn’t understand love until now. She wants to make her family proud by becoming a strong individual. Mishti and Abir’s story takes a leap. She returns to the country to attend her friend’s marriage. She comes in front of Abir once again. Abir introduces his friend Neha. Abir recalls his old memories with Mishti. Mishti proves that their relation ended on a bitter note.