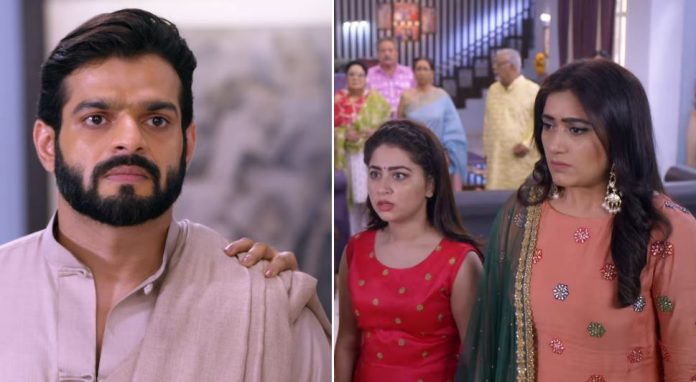 Mohabbatein Starplus Shocking homecoming of Raman Bhalla Sudha and Ishita try to postpone Karan and Ruhi’s marriage so that Raman graces the occasion after his recovery. They want Raman to perform Ruhi’s Kanyadaan. Sudha tells her that Shardul has been wrong this time, he should have discussed with them before talking to the family about the marriage. Ishita too doesn’t understand why Shardul has done this. She wants to call off the marriage some how. She doesn’t know if Raman will be able to come back to the family in a month’s time. She wants him to break out from the state of coma. Sudha tells her that they can make Raman know about Ruhi’s marriage, so that he reacts.

She tells that Raman is most connected to Ruhi and maybe he will react knowing that Ruhi is getting married. Ishita likes the idea. Meanwhile, Shardul informs Arijit that Ishita is not at home. Arijit tells him that once they know about Raman, they will kill Raman. Shardul tries to know about Ishita from the family. He learns that she had gone out with Sudha. He tells Arijit that they will force Ishita to bring Raman home. He thinks there is high possibility of this happening. Arijit wishes him luck. Sudha and Ishita meet Raman. Sudha checks his reports. Ishita asks Raman to wake up and return to family for Ruhi’s marriage.

She asks him to support her. Ishita asks Sudha how will they stop the marriage. Sudha tells her that Karan won’t marry in her absence. She makes a plan to leave for London and state medical emergency so that Karan postpones the marriage. She assures to Ishita that she will find about Neeti’s parents as well. Ishita gets more grateful to her for the brilliant plan. She stays back with Raman to speak her heart out. Karan learns that Sudha had urgently gone to London because of her sick health. He realizes that she was hiding her illness from him to be part of his marriage. He feels sorrowful and breaks down.

He wants to postpone his marriage until his mother gets fine and returns. He takes Ruhi’s consent as well. Ruhi also supports Karan and is okay to push the dates. Shardul understands that Sudha and Ishita have planned this together to push the marriage dates. He informs Arijit about Sudha’s sudden departure. Ruhi and Yug support Karan. They don’t want Karan to feel guilty. Karan wants Sudha fit and fine again. Shardul tells Arijit that Ishita is much clever, she has sent Sudha to find about Neeti. Arijit realizes that Shardul is right. He assures to handle Sudha. He asks Shardul to keep an eye on Ishita and find out Raman soon.

Ishita asks Raman to give her strength like before. She hopes that he hears about Ruhi’s marriage. She further instigates him to react. Raman starts gaining consciousness much to her surprise. Raman proves his love for Ruhi. He wants to fulfill Ruhi’s marriage rituals. He returns to senses by recalling Ruhi. Ishita asks the doctor to check Raman. The family’s prayers get answered when Raman comes out of the coma state. Ishita is very happy to talk to Raman. He tells her that he doesn’t remember anything. She wants him to recall the attacker. She doesn’t let Raman panic. She gets him treated well so that she can take him home.

Shardul tracks Ishita. Arijit gets the shocking news that Ishita has brought Raman Bhalla home. Raman finally meets his family, who are more in shock than surprise, since Raman’s arrival challenges their senses and also their belief on Shardul. Raman unites with his family when Ishita reveals the back story of Raman’s survival. How will Ishita save Raman from Arijit and Shardul? Keep reading.