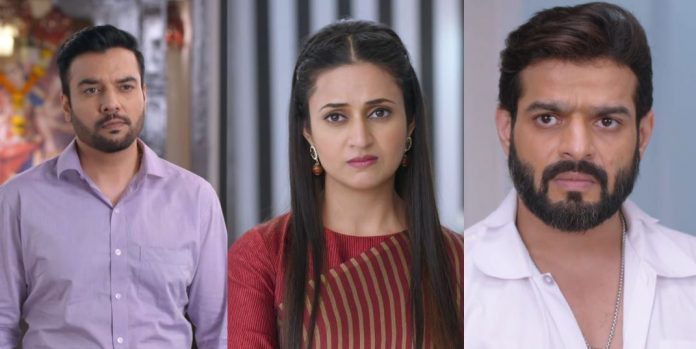 Yeh Hai Mohabbatein Disaster DNA stuns Raman Ishita and Raman face a disaster when Shardul claims himself to be Raman Bhalla. Shardul challenges Raman’s identity when Ishita brings the latter home. She never imagined that Shardul whom she considered as an angel in her life would be challenging Raman. Shardul misleads Bhallas that Raman is an imposter, who has got inside their house by either blackmailing Ishita or fooling her to get the business share. He promises to prove to them that he is the real Raman. He tells them that he is ready to get the DNA test done to prove his word. Ishita doesn’t want to believe his nonsense.

Shardul tells the family that Pihu may also be in danger if the imposter tries to reach her. Mihika worriedly calls Pihu’s boarding school and gets her welfare confirmed. He is sure that Bhallas will be confused by his drama. Arijit asks Shardul about Neeti. He is worried that Raman would meet Neeti and make things worse for them. Arijit tells Shardul to work out his plan soon. Shardul is sure that Neeti will be fine under Mihika’s care. He asks Arijit to relax and let Bhallas fight the real Raman.

He tells how he has convinced the family to believe him. Arijit trusts Shardul. Shardul blocks Ishita from meeting Pihu, who may believe Raman. He asks Arijit to just make arrangements to change the DNA samples and also clear the clinic basement to prove Ishita wrong. Karan, Yug and Ruhi discuss about Ishita and Raman. They can’t believe that Ishita convinced the family twice to accept Raman. They think why did Ishita convince them to accept Shardul if he wasn’t Raman. Because of the confusion, they don’t want to take any wrong step. They know that if they doubt Raman, Raman’s feelings may get hurt forever.

Ruhi asks Karan to speak to Sudha and try to find the truth. Karan awaits Sudha’s call anxiously. Shardul stops Mihika from helping Raman. Ishita reprimands him for trying to hurt Raman emotionally. Mrs. Bhalla feels Ishita got the real Raman home, but everyone disagrees. Shardul makes them emotional fools. Ishita clarifies that Raman doesn’t need to prove himself. She asks them to at least believe them once. Shardul calls a lab technician to conduct the DNA test. Ishita also calls a technician from her assured lab. She wants the test to be done under her supervision. She is surprised seeing Shardul’s confidence. Shardul isn’t scared of anything. Raman and Shardul go for the test.

They want the results soon. Ishita is hopeful that Shardul will learn a lesson. Shardul and Arijit send Sanjay to mislead the technician. They get the DNA samples swapped. Arijit is happy that Shardul’s plan is working. Shardul insults Raman. He blames him to be after Bhallas’ company. He cleverly traps Raman and proves him as the fraudster. Ishita finds Raman getting emotionally hurt by the family suspicion.

She tells them that she can prove Raman’s long treatment. The family wants to see if she is saying the truth. Ishita takes them to the clinic basement to prove herself. She fails to prove anything because of Arijit’s move to vacate the basement room. Shardul wins clearly since he gets the DNA reports in his favor too. How will Ishita prove Raman’s identity now? Keep reading.