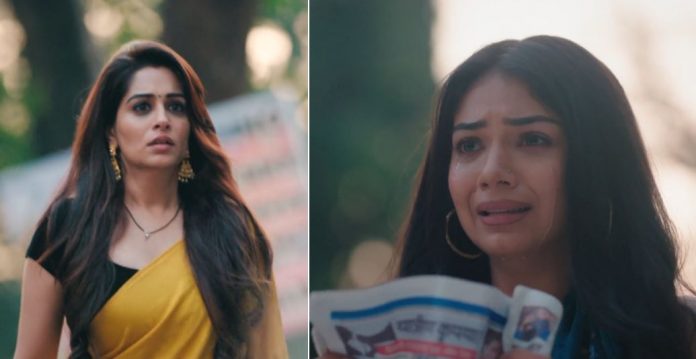 Kahaan Hum Starplus Pooja Shocked Ronakshi targeted Rohit blasts his anger on Pari for his careless mad move. He asks her why did she risk Sonakshi’s marriage and happiness by revealing about Pooja’s adoption to the journalist. He tells her that this mistake can cost Sonakshi a lot, the entire family would blame Sonakshi and hate her for it. Pari denies the matter. He get more enraged when she tricks him. He tells her that he has himself met Tapasya and got the truth out. He asks Pari not to deny further and accept her misdeed. He wants to know that drove Pari to this level of madness. He asks her the reason for falling so low and not even thinking of her own sister Sonakshi’s new life.

Pari tells him that she accepts her mistake committed in rage, since Pooja had insulted her parents that day, she had taken this step. He tells her that nothing can make her take this step, she could have come to him if she had any problem with Pooja. He tells that she didn’t had any right to ruin Pooja and Sonakshi’s lives. He tells her that he won’t keep good terms with her, since she isn’t deserving. He doesn’t want her to come home again. He tells that he will hide the matter from Sonakshi who won’t be able to tolerate the truth. Pari feels ashamed of her actions when he explains the outcome of it.

He thinks to handle the matter at home some how by covering up Pari’s mistake. Sonakshi protects Pooja from the shocking truth. She makes the day long plans to keep her engaged. They decide to head to the spa and enjoy. Pooja likes her cool plans. She feels thirsty. Sonakshi gets Veena’s call at an odd time. Sonakshi goes away to talk to Veena about Pooja’s matter. Pooja goes to buy a water bottle. She learns that her pictures have come in many newspapers and tv channels. She tells that Sonakshi is a tv actress and that’s why she is also coming in limelight. Sonakshi gets a shock on finding her with the newspaper.

She manages to stop her from reading the news. She falls and gets hurt. She thinks her fall will distract Pooja. Pooja still gets to read the news. She gets shattered with the news that she isn’t a Sippy. She learns that she is an adopted girl. She can’t believe this. She thinks how could this happen. She freezes in shock. Sonakshi fails to protect her from sorrow. She takes Pooja home. She informs Rohit about the truth getting known to Pooja. She asks him to come home soon. The family learns that Sonakshi is bringing Pooja home and Pooja had learnt the shocking news.

They get angry on Sonakshi for failing to keep her promise and not protecting Pooja well. They scold Rohit for supporting his wife and risking Pooja with the harsh truth. Sonakshi gets Pooja to the family, who try to console a dejected Pooja. Sonakshi finds Pooja sinking depressed. She slaps Pooja to bring her to senses. Yash tries to talk to Pooja. He tells her that she is his daughter and will always be his daughter. Pooja doesn’t listen to anyone. She stays in shock. She hugs Sonakshi to share her pain. The family had raised Pooja with love. They didn’t wish her to face this pain. Pooja doesn’t can Yash as her dad, which breaks him down.

Yash didn’t think that this would happen if he trusts Sonakshi. He feels he has done wrong to count on Rohit and Sonakshi. Veena asks Yash to give some time to Pooja to deal with the truth. Rohan questions Sonakshi for not keeping Pooja away from the truth. He asks her how did she get busy in work that she forgot her promise. Sonakshi clarifies that it happened in a moment of time, Pooja was fine until she was along. Veena asks her to stay away from Pooja and focus on her shoot. Yash warns Sonakshi, which gets shocking for Rohit and Sonakshi.