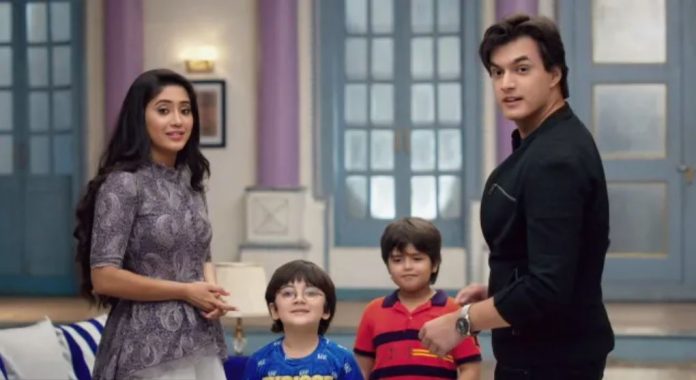 YRKKH Starplus Marriage Divorce twists tangle Kaira Kartik and Naira’s funny swap makes everyone burst into laughter. They think Kartik and Naira are really mad in love to leave their cars behind and run on the roads. Kartik and Naira recall their old proposal moment. They face the obstacles on the way. They pray and get the road clear for them. They run to each other. They don’t break the silence for some time. Their families witness their cute meet. The couple breaks their silence and shock everyone by starting a cute fight. Dadi thinks they are really impossible, they madly ran to meet each other and now they aren’t valuing their moment.

Goenkas and Singhanias want them to stop their nonsense argument and just get ahead with their love confession. Kartik and Naira blame each other for spoiling their moment of confession. Kartik taunts her in haste that she always runs away from tough situations. Naira feels hurt. She tells him that she has already apologized to him for her mistake and doesn’t want him to bring the same thing out again and again. Kartik feels sorry to hurt her sentiments. He apologizes to her. He is glad that she didn’t drag the matter.

She gets her attention back on their confession. She wants him to confess love first. He wants her to say it first. Their fight irritates the family. The family members finally intervene to reprimand them for their kiddish fights. They make Kaira realize that they are together after much ado. They want Kaira to make the most of the moment by proposing each other than arguing. They give them an ultimatum. Dadi asks Kartik to propose Naira else come home with him. Bhabhimaa wants to take Naira home. Kartik and Naira don’t want to get away. The family members give them ask them to hurry up with the proposal else drop the plans of marriage.

Kartik and Naira get in haste and propose to each other for marriage. The families push them to say yes. Kartik and Naira accept their proposal and hug with much love. It becomes a happy moment for them. Kairav is upset that he didn’t attend his parents’ marriage. Kartik and Naira promise to rectify their mistake. They surprise Kairav that they will remarry again for his sake. Kairav and Vansh get glad that they will be attending Kaira marriage. Vansh questions about Kartik’s marriage with Vedika. He hides about Vedika from Kairav.

He covers up the matter and tells that Kartik had married Naira long time back. Kairav asks Naira about it. Naira tells them that their marriage will get more stronger with this move. Gayu praises her son for handling the matter so nicely. Samarth doesn’t get happy and instead blames Vansh. Kairav wants to celebrate happiness with his parents. He tells them that he wants the marriage to happen in a grand manner. Dadi calls the pandit home to get the marriage date. Manish tells that Kartik’s divorce should happen first. The family gets sad thinking of Vedika.

Dadi sinks in guilt, while everyone gets busy in the marriage preparations. Kartik meets Naira to give her a wonderful surprise. He wants Naira to come in his life forever and not go away. He gets her foot prints. Naira gets emotional. Kartik and Naira try to get his divorced processed soon. Vedika doesn’t turn up for the case. Goenkas are worried. They want Kaira marriage to happen soon. Kartik and Naira get a shock when Vedika doesn’t arrive. The family thinks if its intentional or if she is in some big trouble.