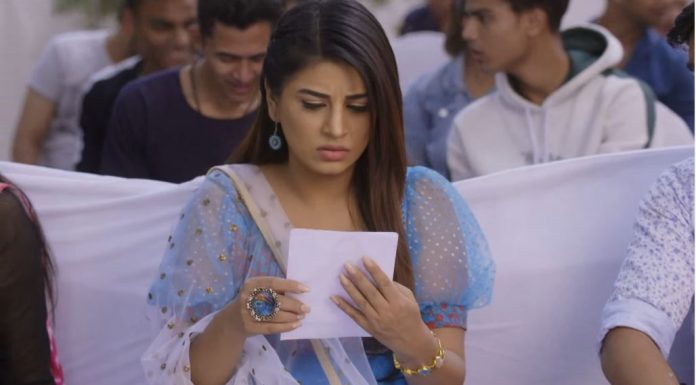 Nimki Vidhayak Shocking speech impresses Parag Parag tries to malign Mahua’s image by spreading the cheap pictures. He tells her that he will make sure that her culprit gets punished. He asks her not to worry for the bad publicity. Nimki takes a stand for her sister like never before. She quiets all of them in her unique way. She asks them if they have liked to see the picture. She asks why do the people like to watch some woman’s picture in this way. She condemns their thinking. She proves that Mahua isn’t at fault, someone else is behind this dirty trick. She tells the people that they shouldn’t get fun by watching such pictures.

She gives a shocking speech to open their eyes and make them ashamed of mocking a woman. She tells them that they should respect women, who give birth to a child and raises him. Mahua gains strength by hearing Nimki. Nimki scolds the people for disrespecting women. Parag gets surprised seeing her strength. Abhimanyu, Sweety and Tunne feel proud of Nimki. She reprimands them for thinking wrong. She proves that Mahua is innocent and she is proud of her. Everyone feels ashamed for their low thinking. She doesn’t care for the morphed picture.

She criticizes the culprit who had tried to defame Mahua. She tells that the culprit doesn’t deserve to live in their society. She wants them not to make the society dirty. She felicitate her sister. Everyone applauds Nimki and Mahua for their strength. Parag becomes the first person to applaud Nimki. This surprises Nimki. Mintu tries to sort the issue between Anaro and Dadi. Dadi asks him to be dutiful towards her first. Mintu gets Anaro home. The people call her mad. He gets angry on the men. Anaro cries that she is abandoned by everyone.

Mintu makes her rest. He promises to be with her and take care of her. Dadi doesn’t want Anaro to make him Babbu. Nimki brings Mahua home. She wants to not spare the culprit. Abhimanyu and Tunne agree with her. They want to find some way to stop the evil men in the society. Dadi calls Nimki and asks her to come to pick Anaro. Nimki gets worried.