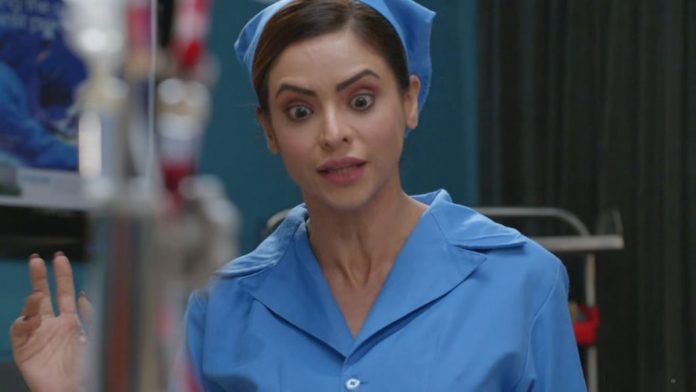 Kasautii Tonight Starplus Prime Shocking Brutal twist Komolika makes an insane and brutal move to Kill Prerna’s child. She tells Ronit that she will be killing Prerna and her unborn child in womb. She takes the nurse’s get up. She tells that no one will doubt her if she gets the nurse’s disguise. She is sure to carry ahead the crime with ease. Ronit assists her. Anurag feels restless. He meets the doctor to tell about some junior doctor checking Prerna’s case. He learns that doctor didn’t send any intern. He complains about Dr. Somesh, sent by Ronit. He takes the doctor to Prerna. Komolika vents her anger.

She tells Prerna that Anurag will always be of her. She wants to get rid of Prerna as soon as possible. She wants to stab her to death. She is glad to see Prerna unconscious. She knows Prerna can’t defend the attack. Anurag gets the doctor there. They question her. She gets helpless to lie and leave from there. Komolika tells Ronit that the doctor had questioned her and failed her plan. She grows mad at the doctor. She asks him to get the doctor so that she teaches him a lesson. Doctor assures Anurag that Prerna will be fine. Veena and Shivani meet Anurag and get to know Prerna’s status.

Anurag tells them that Prerna is fine and even her baby is safe. Veena is grateful to him for saving Prerna’s life. He tells her that they need not worry for Prerna’s baby. She finds it strange that he doesn’t remember anything and still worries for Anurag. She asks him if he really forgot all his life’s precious moments. He tells her that he wants to know what’s hidden from him, he is also trying to find out about his lost years. She gets speechless to tell him about Prerna and his past. She doesn’t want to risk his life. Ronit traps the doctor by faking his sorrow for his ailing sister. He takes the doctor to Komolika.

She attacks him and faints him down. She asks Ronit to take the doctor’s disguise so that they can finish their big motive soon. Ronit and Komolika become the evil team to mislead Moloy, Veena and Anurag. Moloy wants to see Prerna once. Ronit stops him. He sends Komolika inside by lying to Anurag. Moloy and Anurag try to meet the doctor. Komolika meets Prerna once again and expresses her hatred. She tells Prerna that none will be saving her baby now. She gets bitterly brutal in her speech and actions. She tries to hurt Prerna, which makes Prerna conscious. Komolika wants Prerna to experience the pain and fear. Anurag feels something strange.

He wants to rush back to Prerna and check on her once. Shivani spots Ronit and gets worried. She understands that something is wrong. Komolika gets hiding from Anurag when he blocks her plan for the second time. She doesn’t want to get caught in the action. She misleads Anurag again. Anurag gets relieved that Prerna is fine. Komolika finds a golden chance to kill Prerna’s baby. She turns obsessed for Anurag. She tells Prerna that none can snatch Anurag from him. She angrily stabs Prerna to kill her baby.