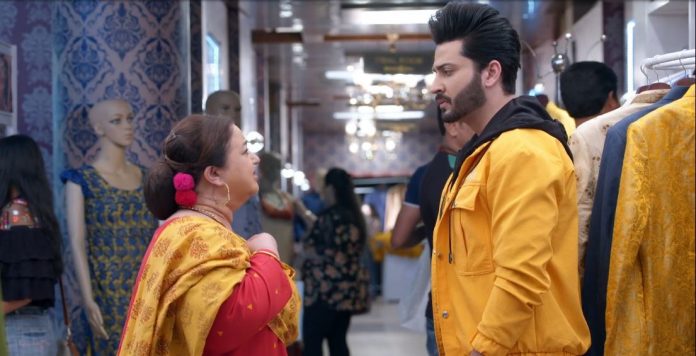 Kundali Bhagyaa Unexpected Reality check for Karan Karan and Preeta get helpless in the unavoidable moment. He falls for her once again. Preeta wants to keep him away. Karan feels Preeta’s love. Preeta warns him. Mahira wants to spend time with Karan. She finds Karan missing. She plans to call him to the trial room for help. Sarla looks for Preeta. Preeta scolds Karan for his cheap romance. Karan blames her for calling him for help. She clears that she had asked Sarla to help. He confronts her feelings when she didn’t stop her heart and liked their closeness. She tells that she was in shock and couldn’t react early.

She asks him not to have misunderstanding. She tells that she doesn’t like him. He also shares his bitter feelings. They both deny their love, that they care for each other. He finds her intentional denial on her face. Karan asks her to deny his love if she can. He gets into a moment with her to make her realize her feelings. She scolds him for his drama test. She asks him not to get mad. He doesn’t want her to shout on him. Sarla and Kareena get into a heated argument. Sarla finds Preeta ill fated that she met Karan. Preeta doesn’t want Sarla to see Karan. She stops Karan from going outside.

Karan asks Preeta if she got interested in him suddenly. She doesn’t want him to get scolded by Sarla. He tells that he isn’t scared of anyone. She knows he will be terrified on seeing Sarla’s wrath. He asks her about her worry for him. He tells that he wants to face the insult, being the bad guy. She tells that Sarla will not spare him, she isn’t his fan. Kareena humiliates Sarla and Preeta. Sarla’s loud argument reaches Mahira. Mahira also gets involved in the verbal fight. Preeta and Karan witness this and lose their cool. Preeta wants to answer Kareena.

She fights with Karan over their argument. Karan favors Kareena. He asks Preeta to control her mum. Karan wants Preeta to respect his aunt. Mahira intervenes to support Kareena. Karan doesn’t want Preeta to go out and face Kareena. He wants to handle the matter. Preeta and Karan recall their moments. Sarla asks Mahira not to cry all life by believing the fraud Karan. She wants Karan and Luthras to accept their fault. Karan finds Sarla crossing limits. He goes to end the argument. He finishes the billing to leave soon. Mahira wants him to know her choice. Karan asks her not to behave odd.

Kareena asks him to treat Mahira as his would be wife. Karan continues his shopping on Kareena’s insistence. Kareena sends him and asks Mahira to insult Preeta. Mahira stops Preeta to teach a lesson. Karan faces Sarla after a long time. She finds him not ashamed of his actions. Kareena and Mahira insult Preeta. Mahira blames Preeta for wooing Karan. Sarla wants to kill Karan. She tells him that she can’t let her hatred overpower her senses. She tells him that she values him for the good deeds he did. She doesn’t want to hurt him, since she regarded him like a son always.

She condemns him for being so ungrateful and fraud. She couldn’t believe that Karan cheated Preeta in love. She curses Karan to never stay happy in his life. She tells that Preeta cries every day for him and has chosen to be his wife. Karan feels guilty when Sarla shows him a mirror of his misdeeds. She calls him a stain on friendship and love.