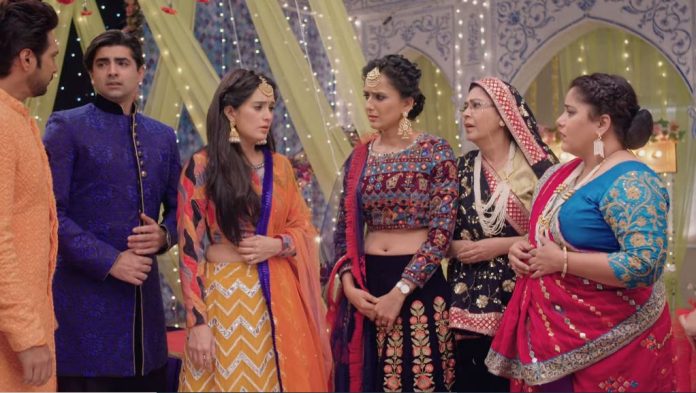 YRKKH Starplus First time twists Vedika threatened Dadi and Kartik’s sudden entry shocks Vedika more than Singhanias. Vedika gets upset when Dadi makes a clean excuse and makes her away from Naira’s mehendi. This fills her heart with more hatred and anger. Dadi tells Singhanias that she has got a call from Guru ji, who suggested her to make Naira perform a rasam. She asks Naira to grind the mehendi. She makes Vedika out of their sight. Dadi corners Vedika to suggest that she shouldn’t come between Kartik and Naira, after all she had herself shown a big heart and sacrificed her love for Kartik.

She asks Vedika to stick to her decision, no matter how tough it gets for her. She clears that Kartik now belongs to Naira and Vedika’s intervention won’t be tolerated. She nicely warns Vedika. Dadi asks her not to fight the fate and accept it. Vedika doesn’t like the warning. She thinks Dadi’s affection ended for her. Naira feels guilty that Vedika is lonely because of them. She tells Kartik that Vedika would be upset to watch the marriage functions. He tells her that Vedika decided to unite them and they can’t help her much. She doesn’t want Dadi to hurt Vedika’s sentiments. He tells that Dadi is behaving rude due to her tension.

He is sure that once he gets divorced, Dadi’s tensions will end. He asks her to be happy. He cheers her up and romances her. Samarth meets Singhanias and gets a good welcome. He is happy that Gayu finally accepted his wish to get a child. He appears happy. Singhanias are happy for Gayu. Naira comes for her mehendi ceremony. The family praises her. Kartik and Kairav fight to choose the mehendi design for Naira. Vedika finds Naira facing a risk. Her heart gets bitter for Naira. She doesn’t warn Naira about the risk and lets her bear it. Naira falls down the stairs, but manages to cling along, which results in her skin peel on the hands.

Kartik rushes to save his lady love from getting injured. The family is relieved that she is fine. Naira breaks down that she can’t get the mehendi applied now, since her hands got scratches. The family asks her not to apply the mehendi, since it will hurt her more. Naira cries on failing to fulfill the rituals for Kairav’s sake. She wanted everything to be perfect. She wants the rituals to take place. Kartik surprises her by telling that she is equal to him, she is his better half and he will do his duty now. He wants the family to apply mehendi to his hand.

Kairav too wants the design on his hands. Kartik and Kairav nicely console Naira and support her. This angers Vedika, who sinks in negativity. She ruins Naira’s mehendi. She doesn’t want anyone to doubt her. She hurts herself to mislead them. Kaira and families worry for Vedika. Dadi knows Vedika has done this intentionally. She reprimands Vedika for attempting to ruin Kaira happiness. She swears that the marriage will happen on the right mahurat.

Vedika feels hurt, but acts innocent. Dadi makes Vedika away. Vedika gets frustrated on seeing Naira happy with Kartik. Vedika vents out her anger on Naira for the first time. Naira realizes that her intuition was right, Vedika really wants to snatch Kartik.