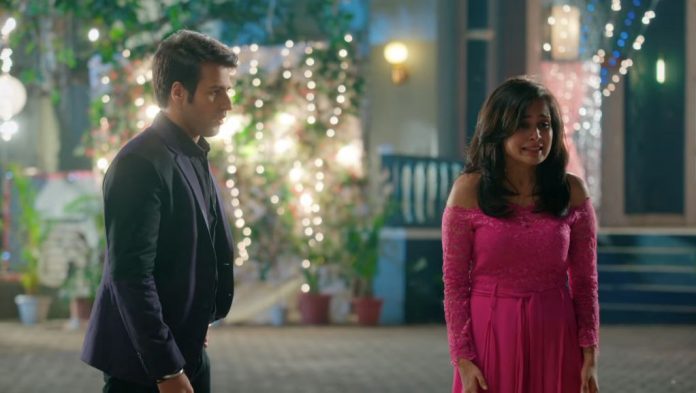 Rishte Pyar Starplus Biggest twist Shocking truth for Kunal Kunal makes a big mistake on Meenakshi’s saying. He doesn’t know Meenakshi’s evil mind. Mishti celebrates her birthday with the family. She gives the credit to Kuhu and Nannu for making her birthday a real delight. She thanks Nannu for his special surprise. Nannu wants to tell her about his feelings changing for her. Kunal gives him a drink and then realizes his mistake. He stops Nannu from consuming the drink when he recalls Abir’s encouraging words. Abir’s words stop Kunal from going on a wrong path. Kunal doesn’t dispose the drink and leaves it there. Kunal wonders why is Meenakshi wanting him to take such a step.

Mishti has plans to meet Abir and know his feelings. She is very hopeful since she has got red balloons as Abir’s surprise. She knows Abir loves her. She asks Nannu to have a drink. She gives the same spiked drink to him unknowingly. Abir messages Kunal to hand over the gift. Kunal looks much worried to him. Abir wants to know if there is anything related to Meenakshi. Kunal doesn’t reveal anything. Abir realizes that Meenakshi is making Kunal a puppet again. He doesn’t want Kunal to lose his happiness. Being a brother, he gets protective of Kunal. Abir rushes out of Maheshwari house, while the pendant drops from his pocket.

Abir doesn’t see the pendant. Kuhu informs Kunal that they have to call a doctor for Nannu, who is suffering seizures due to his old addiction. Kunal learns that Nannu was a drug addict and faced much difficulty to get rid of the addiction. He feels he has put Nannu in big trouble due to his mum’s command. He sinks in guilt. Kunal and Kuhu rush to get a doctor. Mishti and family try to help Nannu. They are worried for his state. Abir finds Meenakshi away from home. He asks Parul the cause of her worry. He tells her that Kunal seemed worried and its connected to Meenakshi.

She tells that she doesn’t know anything. Abir tells her that Meenakshi can go to any extent for fulfilling her motives. He finds a solution, that’s to tell Kunal the entire truth and strengthen him. He doesn’t want Meenakshi to ruin Kunal’s life by just threatening them all the time. Parul agrees to Abir. She has much faith on Abir. She hands over her son’s responsibility to Abir. He tells her that it will be better to disclose the truth to Kunal before he learns it from some other source. Kunal gets the doctor home. He wishes Nannu stays fine.

Doctor tells them that they have to do some tests and find out the type of alcohol consumed. Mishti and Jasmeet feel Nannu can never touch alcohol, since he is determined to end his addiction. Abir promises to bring Kunal home. Mishti and Kuhu learn that Kunal had spiked Nannu’s drink for his motive.

He tells that he didn’t know about Nannu’s addiction. Mishti asks about the alcohol type. He gives her the whiskey bottle. Mishti asks Kuhu to inform the doctor and family. She asks her not to name Kunal. Kuhu rushes to help the doctor in treating Nannu. Doctor asks the family to rest assured, Nannu will be fine soon. Mishti reprimands Kunal for spiking the drink and putting Nannu in danger. She accuses Kunal for threatening Nannu. Kunal tells that he wanted to know the truth of her drama, since Meenakshi was worried for Abir. Mishti asks him not to ruin Abir’s life. She admits that Abir loves her.

She asks him to realize that he is just his mum’s puppet. He can’t hear anything against his mum. She finally blurts out the truth that Kunal is Meenakshi’s step son. He can’t believe this. She reveals that Parul is his real mother. Kunal shatters with the biggest truth. Kunal meets Abir to know the truth. Kunal self hurts himself by putting himself in trouble. Abir reveals the entire truth to him.