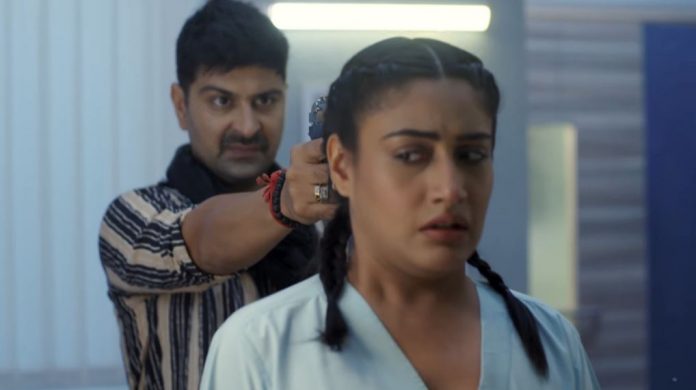 Sanjivani StarPlus Terrifying twists Sid Ishani Upcoming The intruder in Sanjivani creates a havoc. Vardaan is worried for the sudden shocker. He doesn’t know who is the man and what are his motives. Karan takes Ishani at gun point. She tells him that the heart organ will get useless if she delays in taking it for the transplant. She asks him not to make a big mistake and let her go, since he will get caught ultimately. He tells her that he is aware of the CCTV not in working mode. He doesn’t care of anything. He just wants his son to be safe. He doesn’t reveal his truth or motives to Ishani, who could have helped him if he told her. He tells her that she can’t go away with the heart organ.

She doesn’t understand that he is after the organ. She tries to find some way to run away. Vardaan and Sid try to find her and save her from the attacker. Ishani shouts for help. She doesn’t have her card to open the door. She gets trapped inside. Sid realizes that he also doesn’t have his card with him. Luckily, Vardaan reaches them to rescue. Karan shoots at Ishani. She freezes for some time. She realizes that Neil has got shot instead her. Sid locks Karan. Vardaan rushes Neil for the quick treatment. He asks Anjali to contact the police. He wants the police to nab the attacker.

Karan bangs the door. He wants to get free. Sid takes Ishani to the OT to give the organ for the surgery. Anjali tells Vardaan that police wants to know Karan’s motives first. Vardaan feels Karan is after the heart organ. He isn’t sure of it. Karan wants to keep his promise and save his son. He tries to find some other way to reach the OT and get the organ. Ishani tells Sid that Karan isn’t doing this for money, but has some other motive. Karan’s wife asks him to do anything possible to save their son. Karan doesn’t want to lose.

Asha learns that Sid and Ishani are in danger. She wishes they stay fine. Her heart gets cleared of ill feelings for a while. Vardaan informs Ishani that Neil is stable. Sid tells Ishani that he will nab the attacker by helping the police. He expresses her feelings again. He tells her that he will always love her. She knows it well. Sid and Vardaan continue to find Karan, who has already reached the OT. Karan gets the doctors at gun point. He threatens to kill Ishani, who cheated him. Sid realizes the huge threat on Ishani.

Reviewed Rating for this particular episode: 3/5 The only thing good in the predictable drama is to see Vardaan and Asha’s concern for Sid and Ishani’s lives.
This rating is solely based on the opinion of the writer. You may post your take on the show in the comment section below.