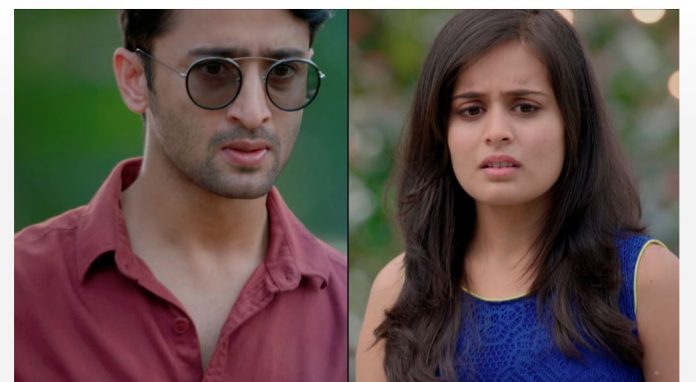 Yeh Rishte Pyar Ke Ultimatum bands for Mishti Kunal was nearly dying in the accident. Abir saves him and gets him home. He fulfills the promise given to Parul. Meenakshi wants to know about Nannu. Kunal doesn’t tell anything. He can’t accept the fact that she isn’t his mum. Abir takes Kunal with him. He lies that everything is fine. Kuhu, Mishti and Jasmeet are happy that Nannu is fine now. They take a selfie. Parul gets milkshake for Abir and Kunal. Kunal refuses. He doesn’t want to face her after knowing the truth. He asks Abir not to let anyone know that he is aware of the truth. Nannu promises to secure his life, since he has much to lose. He doesn’t want to lose Mishti. He values his life.

Mishti is worried for Kunal. She asks Kuhu not to fight with Kunal. Kuhu questions her feelings for Abir. Mishti doesn’t answer. She prays that Abir comes to meet her. She gets surprised seeing the pendant which Abir threw in the lake two months back. She realizes that he still loves her. Abir messages me to arrange a meet. She looks forward to meet him. Abir doesn’t know why did she use such a big truth to hurt Kunal. He wants to know the reason from her. Kunal talks in sleep and tells that he is not Parul’s son, but Meenakshi’s son. Parul shatters. He gets depressed.

She wants Kunal to accept the truth. Mishti tells Nannu that Kunal had spiked his drink, hence she has also hurt Kunal by telling his birth truth. She feels guilty. He is angry that Kunal is just his mum’s puppet. Abir comes to meet her and misunderstands her on overhearing her conversation. Abir is hurt that Mishti intentionally wants to ruin Kunal. He starts hating her. He thinks he was right to break up with her. He meets Mishti and reprimands her for the worst move. Mishti clarifies that she never wanted to hurt Kunal this way. She reveals Kunal’s mistake to target Nannu. Abir tells her that whatever Kunal did, he didn’t deserve to break down this way. He finds her a wrong person to enter his family.

He tells Mishti that he will never forget her revenge. Mishti, Nannu and Kuhu fail to explain Abir. They know Kunal is Abir’s weakness. Kunal sinks in trauma because of the shattering truth. Meenakshi asks Abir the matter. Abir doesn’t tell anything. He makes noodles for Kunal and feeds him by his hands. He tries to prove that things will always be same between them. Kunal wants to be called Meenakshi’s son. He feels embarrassed to accept Parul as his mother.

He doesn’t know Meenakshi is much bad-hearted and was blackmailing Abir about him. Kunal thinks Meenakshi is a great woman who accepted her Sautan and step-son. Kunal cries when Abir expresses love. He hugs Abir. The brothers’ bonding makes Parul and Meenakshi happy. Parul realizes that Kunal knows the entire truth. Mishti feels sorry for hurting Kunal with the truth. She didn’t intend to do so. She cries in the temple. Abir doesn’t want to forgive her for the huge blunder. He wants her to stay away from Kunal. He gives her an ultimatum that she shouldn’t interfere in his family matters from now.