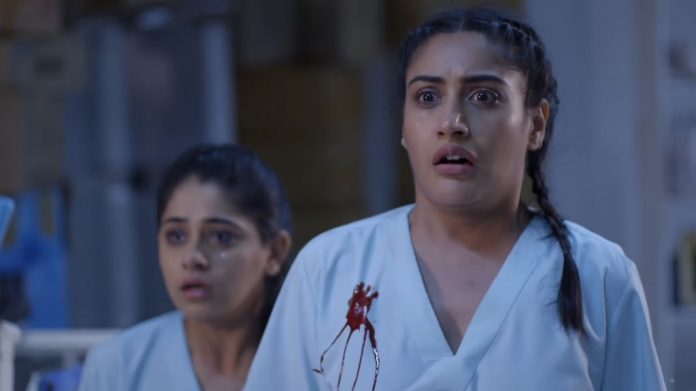 Sanjivani Ishani faces death Asha Sid shaken up Karan takes Ishani and other doctors at gun point. Ishani asks him the motive behind his terrorizing move. Karan tells her that he just wants to save his son, who badly needs a heart transplant. He tells that he will not spare anyone who comes in his way. Ishani understand the root of his pain and anger. She tries to counsel him. Rishabh also suggests that they can talk and find some solution. She tells that they can help the boy, since they all are doctors. Karan doesn’t believe in them, since the doctors at other hospital were heartless. He thinks Ishani is also tricking him.

She wants to explain him that police will not leave him if he harms anyone. Karan tells that they will be saving him from the police. He limits Ishani from her long talks. Sid asks Ishani if everything is fine inside the OT. Karan makes Rishabh lie to Sid. Rishabh lies that the surgery is going on. Sid is convinced, but gets restless. Karan asks Ishani to give her the heart organ. He threatens to kill them. Asha gets too tensed and begs him to spare her, since she is carrying a baby in her womb. Karan tells that Asha will be his first target now, since now they can relate to his pain.

He tells that his child is also fighting for his life. He wants the heart organ at any cost. Ishani tries to give him a reality check. She tells him that the cops will shoot him down if he harms Asha or anyone else, its better to surrender and find a solution. Karan doesn’t take her advice. He compels Asha, Ishani and Rishabh to accompany him towards the exit. He takes them at gun point. Sid feels like he missed out a hint. He gets a strange feeling. He runs back to the OT and realizes that the attacker was inside the OT.

He realizes that Karan has taken Asha and Rishabh as well with Ishani this time. He wants to find them and rescue. Ishani leaves her ring to give a hint to Sid. She wishes that Sid gets her clues and reaches her. Sid gets the ring and gets the direction. Karan doesn’t let Rishabh run away. Ishani is worried when Karan threatens to kill Asha. Ishani finds Sid around. Sid assures that he will save them. Ishani calms down Asha, who gets hyper in tension. Karan tells Sid that he will shoot pregnant Asha, if he doesn’t leave him. Ishani tries to protect Asha, since Asha is pregnant.

When Karan shoots Asha, Ishani makes a heroic move. Ishani gets shot while saving Asha and her baby in womb. Sid can’t believe this. Ishani is rushed to the OT. Sid requests Juhi to operate Ishani and save her life. Ishani gets sinking during the surgery. This breaks Sid’s hopes. karan gets arrested. Asha realizes that Ishani risked her life just to save her and her baby. She feels indebted to Sid and Ishani, who have always protected her, despite her evil plottings. Asha decides to unite Sid and Ishani, once Ishani gets stable. Ishani’s survival chances get less. Juhi tries hard to save her. Sid fears of losing Ishani. Will Ishani survive? Keep reading.