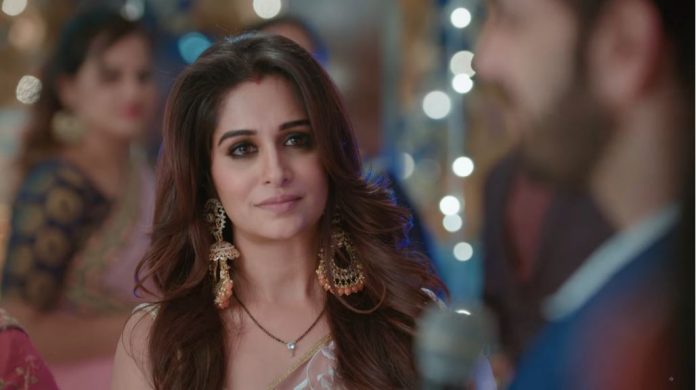 Kahaan Hum Starplus Surprising Ronakshi Upcoming twists Rohit and Sonakshi get into a moment. They have been away for a while. Rohit wants to reconcile with her. He wants to end the long silence between them. He runs to get ready. Rohit and Sonakshi get decked up for the party. He tries to apologize to her and end their issues. She asks him if he has fought with her since Rani is an alcoholic. He tells her that the truth doesn’t matter now. He asks her not to feel guilty, since things aren’t in their control. He tells her that she can’t blame herself always. He awaits her. He gets mesmerized seeing Sonakshi. He falls for Sonakshi again. He wants to be with her. Nishi and Yash meet their friends.

One of the friends comments on her age, but compliments her gorgeous looks. Suman and Pari also grace the party. Suman insults Nishi and hurts her sentiments by raising the matter of Pooja’s adoption. Nishi tries best to counter the taunts. Suman goes on to hit harsh taunts, which ends Nishi’s tolerance. Nishi feels bad of her words. Veena has overheard their conversation. She asks Suman not to hurt Nishi by talking about the sensitive matter. Suman asks her not to make the matter sensitive by hyping it, its a good thing to adopt a child.

Veena finds her impossible. Suman wants Sippys to learn things. She doesn’t realize that she has gone too far to insult Nishi this time. Rohan and Pari romance in the kitchen. He tries to fulfill her challenge by kissing her. She runs away. They drop a bowl. Tanya gets alert by the sound and goes to check. She finds Rohan with Pari. They make excuses to fool Tanya. Rohan is sure that Tanya won’t doubt him. Tanya wants to question Pari. Pari turns worried to face Tanya. Nishi wants to prove to Pooja that Rani is addicted to alcohol. She sends a drink to Rani.

She wants to Pooja to watch Rani drinking. Rani ignores the drinks. She intentionally acts in front of Pooja. She keeps her image clean and fails Nishi. Nishi wants to expose Rani some how. She gets angry. Rohit addresses the guests and congratulates Nishi and Yash on their anniversary. He tells them that Yash has taken over their big problem by marrying Nishi. He applauds them for not thinking of their ego and compromising always to have a relation filled by love and trust. He tells that their marriage is ideal and he is sure that they will always be happy. He tells that he wants his marriage with Sonakshi to be a similar one.

He expresses his views on the relation of marriage, how ego silently kills love between the husband and wife. He tells that he doesn’t want ego to break his marriage. He lightens everyone’s mood by praising Nishi and Yash’s pairing. Sonakshi gets much emotional on hearing him. She goes after Rani and finds her drinking. Rani fakes goodness and goes away to fulfill her craving for liquor. She drinks a lot and tells that she wants to hide her true motives from Sonakshi, that’s to loot the Sippys. Sonakshi will soon learn Rani’s intentions.

Naren’s friend raises a question on Sonakshi’s character. He taunts that Sonakshi has reached the fame status by comprising in the tv industry. Suman gets too angry. Veena asks Suman what’s the matter. Suman asks Veena to ask the guest. The man asks Suman why didn’t she educate Sonakshi well. He tells that Sonakshi’s romancing with the hero is wrong. Sonakshi clarifies on her profession. Rani also belongs to the same profession.

She tells them that Sonakshi didn’t do the intimate scenes, being a senior actress, she was her duplicate in the song. The man tells that the common people won’t know this and lose trust on Sonakshi. Sonakshi asks him not to defame the actresses. Rohit also gets angry on the man. He supports Sonakshi. He asks him to talk well with a respectable girl and keep his class. Naren warns Rohit against insulting his friend.