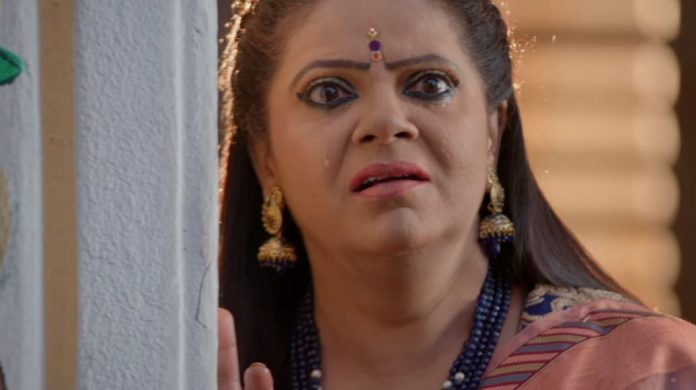 Rishtey Pyar Bursting twists Meenakshi in shock Parul and Meenakshi stay worried for their sons. They want to know what had happened. Parul feels Kunal doesn’t need her, he never valued her and will never respect her in future. He thinks he is ashamed to be called her son. She is content that he is happy to live as Kunal Rajvansh. She doesn’t know that he is feeling alienated and doesn’t want to be called Meenakshi’s son now. Meenakshi wants to ask him about Nannu. Mishti plans to meet Abir and apologize to him. Mishti meets Abir in the market. Kuhu tries to call Kunal and talk to him.

Nannu learns from her that the entire family has gone to the market. He fears that they can be witnessing Abir and Mishti’s argument there. He doesn’t want Mishti to get caught. He rushes to stop her. Mishti apologizes to Abir. He feels that she doesn’t care for anyone’s sentiments, just the way she used the harsh truth as a weapon against Kunal. He tells her that he didn’t imagine she would fall so low and hurt Kunal so much. She tries to explain herself. She wants to tell him about Kunal’s huge mistake to put Nannu in danger. He doesn’t listen to her at all. Kuhu is afraid that Mishti and Abir’s meeting will start a new drama.

Abir scolds Mishti for telling the truth to Kunal. He thinks she has told this truth to take revenge on Kunal. He tells that he hates to accept that he loves her. Mishti is hurt by his hatred, but is happy that he loves him. He wanted to protect Kunal and failed because of Mishti. He angrily jerks her off. Nannu saves her from getting hurt. He scolds Abir for his mistake. He asks her to stay away from Mishti. He calls Mishti his girlfriend. Abir congratulates Mishti for her new relation and warns her to stay away from his family.

Mishti gets confronted by her family, who have seen the entire drama in the market. Kuhu wants Abir to explain his deed. He asks her to first meet Kunal. He tells her that Kunal isn’t fine. Kuhu goes to meet Kunal. Vishwamber is much hurt that Mishti is still in touch with Abir. He tells her that even if she is hurting herself by silly mistakes, he will continue to support her. He promises to always be with her decision, no matter how much she hurts herself and him. He tells her that he will not react on the sorrow she gives him. His emotional speech makes her cry. Mishti didn’t wish to hurt Vishwamber and Rajshri so much.

Nanu defends Mishti, but in vain. Meenakshi asks Kunal about Nannu’s condition. Kunal doesn’t want to talk to her and tells that he isn’t her son. She doesn’t understand. Kuhu meets him and confronts him for his move to spike Nannu’s drink. She scolds him. Meenakshi thinks she may get her answers now. Kunal angrily blurts out the truth that he isn’t Meenakshi’s son, since Mishti has revealed this truth to him.

He is much hurt and in dilemma on his identity. Meenakshi gets a huge shock on knowing that Kunal learnt this truth. She feels Mishti has broken her family. She wants revenge on Mishti. Abir decides to marry Mishti, since Kunal is aware of the truth now. He tells that she can’t threaten him about Kunal now. Meenakshi asks him to go ahead, but declares that she will never accept Mishti as her Bahu.