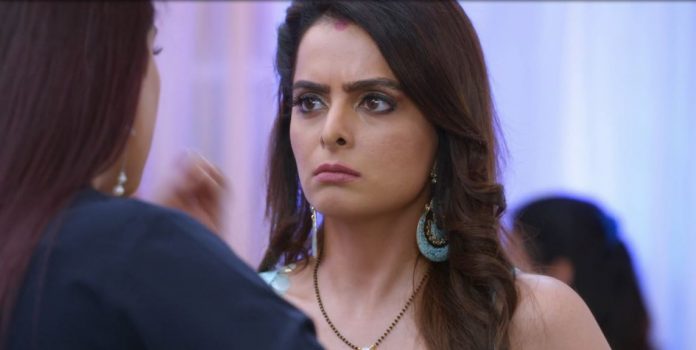 Kundali Bhaagya Sherlyn threatened Preeta at task Sarla, Preeta and Shrishti are troubled by Luthras. In Sarla’s absence, Janki protects the girls. Karan visits Preeta to hurt her further emotionally. He tells her that he needs her for the service. He wants her to work well. Shrishti tells him that he cheated them and they will not serve Luthras’ guests. Karan tells them that its not a cheat that they made the booking by company name. Preeta doesn’t want Shrishti to decide anything. She asks Karan what does he want. He tells her that he wants her to work well else she will face the dire consequences. He asks her to take this as a work opportunity. Preeta gets much hurt. Prithvi misses Sherlyn.

He thinks why is Sherlyn avoiding him. He is sure that she will soon forgive him and love him again. He calls Sherlyn to ask her to meet. Sherlyn doesn’t answer the call. He wants her to stop ignoring him. Sherlyn is upset on stupid Prithvi. Ramona taunts her about the caller. She scares Sherlyn a bit. Shrishti tells Preeta that they will be in trouble if they don’t fulfill the contract. Preeta goes to work. Janki and Shrishti join her. Ramona asks Sherlyn to block her boyfriend’s number when she is in a function.

Sherlyn realizes that Ramona is very clever. She finds Ramona cool and thinks to join hands with her. Kareena and Ramona discuss about the lawyer filing a case on Aroras. Karan doesn’t want this to happen. He was just trying to hurt Preeta’s feelings. He stops Kareena from such move. He tells Ramona that they will go to any five star hotel if she wants good service. Preeta assures that they will do their work well like always. Karan and Kareena get glad seeing her afraid and obeying them in compulsion. Karan tells that they should finish Mehendi function first and then focus on revenge on Sarla. He asks Kareena to keep Preeta out of her revenge plans.

Kareena asks him if he loves Preeta. He tells her that he will take revenge on Preeta his way. Sherlyn tells Kareena that he means something else. Kareena feels tensed. Rakhi gets the bride Mahira to the function hall. Some goons plan to rob the Luthras. Preeta wants the things to be perfect. She takes much tension. Kappu asks her to stay relieved. Karan hires Preeta for his personal work. He makes her run around. He wants her to welcome his would be wife Mahira. She understands him well. He asks if she isn’t hurt to see him with someone else. She denies it.

Sherlyn insults Shrishti. She gets a chance all thanks to Karan. Shrishti knows how to handle Sherlyn. Preeta thinks Karan will fail in his plans and get himself hurt, since she will not react on his instigation. She knows Karan will be hurt if she doesn’t show her concern. Shrishti insults Sherlyn a lot. She also threatens to reveal about Sherlyn’s pregnancy. Sherlyn denies it. Shrishti tells that she knows the truth well. Sherlyn gets much tensed.