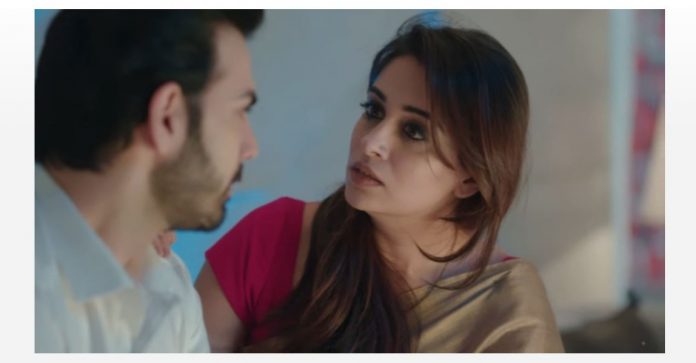 Kahan Hum Kahan Tum Starplus Upcoming Today Nishi is much worried that things aren’t going as she planned. She tells Yash that she had hired Rani and wanted her to break Pooja’s hopes by instilling hatred. Yash wants her to talk to Rani and remind the deal. She is angry that Rani didn’t execute her plan. She confronts Rani for going against her. She reminds that Rani had to play an alcoholic and shock Pooja so that Pooja hates her. She wants Rani to leave from the house. Rani tells that she has become Pooja’s fake mum for 5 lakhs. She thinks 5 lakhs is too less. She wants 5 crores. He asks Nishi to pay her good amount if she wants her plan to go well. Nishi is much shocked.

On the other hand, Rohit gifts a beautiful saree to Sonakshi. She doesn’t like it much, but accepts it, knowing he isn’t habitual to shop for sarees. He tells her that he is proud the way she had answered Pradeep. She is worried for the same thing. She feels Naren would be much upset. She tells him that she isn’t pleasing the family. He tells that she can’t help the family happy. He asks her to think of her husband, who is much hungry. He goes to get dinner for them. He finds Nishi worried.

He learns about Rani’s blackmailing move. He tells that he has already warned Nishi against hiring Rani for this foolish plan. He tells that its a total disaster that they have got greedy actress home for their drama. He is more hurt knowing Nishi and Yash intentionally involved Sonakshi in the drama. He tells that Nishi blamed Sonakshi in front of the entire family while portraying innocent in Rani’s matter. He doesn’t want the family to blame Sonakshi. He is worried for his wife’s sentiments.

He tells that everything can’t happen according to her plan, Rani will continue to blackmail them. He gets angry finding Rani manipulating Pooja. Rani wants Pooja to respect Nishi and love her always. She justifies Nishi’s actions to impress Pooja. Pooja gets influenced by Rani.

She feels Rani is a great person. Also, Rohan and Pari plan to continue their affair, knowing Tanya isn’t doubting them. Pari tells that Tanya trusts her and wants her to spy on Rohan at his office. Rohan is glad that Tanya is so foolish to ignore their bonding. He is disturbed and feels bad when Sonakshi blames herself for the family tensions. He thinks to tell her the truth. He cries that he isn’t able to give a good life to Sonakshi as he promised her before their marriage. He wants to be a dutiful husband. Sonakshi asks him the reason for his sorrow. She questions him about Pooja and Nishi. He gets speechless. Sonakshi asks him to just tell the truth. Will Rohit confide the truth? Keep reading.