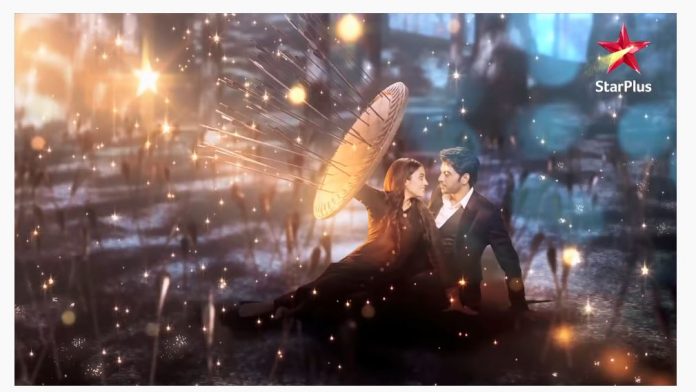 Star Upcoming Jadu Jinn Ka Muskaan Highlights Roshni informs Sir ji that Muskaan has come home to stay. She asks him what shall she do now. He asks her to protest against Muskaan. Gayatri tells Muskaan that she missed her a lot. She wanted Muskaan to live with them since a long time. Ronak gets Muskaan’s clothes. He tells that he had kept all her belongings safe. She gets glad to know. Roshni makes Khushi fall down. Khushi doesn’t blame Roshni. She tells Roshni that she doesn’t want to fight. She asks Roshni not to threaten to leave the house, Ronak will get sad. Ronak hugs them. Roshni gets surprised. Khushi tells Ronak that she won’t let Roshni go away.

Muskaan tells Ronak that their daughters are like them, who always need each other to balance their lives. Muskaan prays in the temple and gets sindoor in her hairline. Ronak is happy to see this. Roshni asks for food. Khushi cries on eating spicy food. Roshni had added the chilli in her food. Muskaan understands this. She runs to get honey for Khushi. Nisha intervenes and takes care of Khushi. Muskaan cries that Sir ji had snatched both his daughters. Ronak tells that Sir ji had raised Roshni, but she is their daughter.

She tells that Roshni may never change because of Sir ji. Ronak tells that Roshni thinks Sir ji is a good person, but we have no proof for his crimes. He is sure that Roshni will soon understand the truth. Khushi asks Nisha why did Muskaan call Roshni as her sister. Nisha lies to her. Sir ji comes to stay in their house. Roshni asks Sir ji if he is Ronak’s dad. She wants to know the truth. Sir ji calls the police to get Ronak arrested. Ronak is arrested for polygamy.

Aman stabs Roshni to bring her back to her old self. She gets free from Kabir’s spell. Aman and Roshni get back together as one entity against the evil Jinn. The family also supports Aman and Roshni. Kabir feels Aman will be fighting him to become the Jinn world ruler. Aman tells that he has won his family and Roshni’s love, which is much important for him. He asks Kabir to rule over the world and fulfill his dreams. He doesn’t want to come in Kabir’s way.

He explains the meaning of true love to Kabir. Kabir makes a leave. Aman and Roshni celebrate their togetherness, while Parveen makes a new plan to make her sons fight. She wants to scare Aman and make him reach the black jungle, where she will be snatching his powers to become the queen of Jinn clan.

Aman gets attacked by the Jinn forces again. He didn’t know that he didn’t get of all the evil yet. He conquers over Kabir and thinks the story is over. Aman gets trapped on the powerful night of stars rain out. Roshni finds him in danger and asks him to run away. She protects him using her Ayana powers. Aman’s true love makes him win Roshni again. They both aren’t aware that the biggest danger is inside their house, who is none other than Aman’s mother Parveen. Aman and Roshni will be facing new troubles with Parveen becoming the new evil.