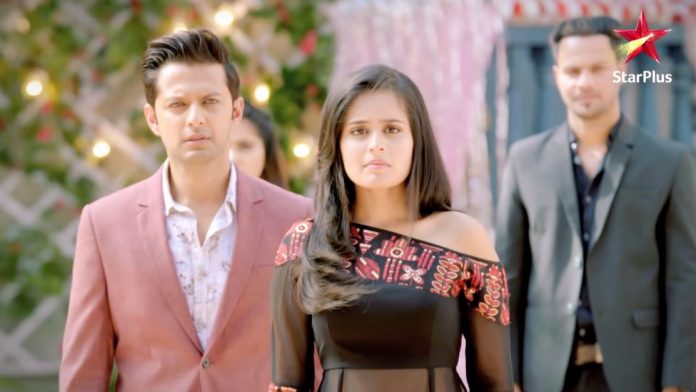 Rishtey Pyar Promo Starplus Abir Mishti last love attempt Abir is disheartened thinking Mishti is moving on with Mishti. Nannu tells Mishti that Abir will not come back to her. He asks her not to give more chances to Abir, who is just making excuses of his family members to get rid of her. He is much hurt that Mishti is lowering her self-esteem just for the sake of Abir, who doesn’t seem to love her equally. Mishti loves Abir unconditionally. She knew that he will always love her, but his behavior makes everything uncertain. She tells him that she wants to talk to Abir once before giving a reply to Vishwamber.

She is clear that she doesn’t love Nannu, but he is her best friend. Her mind doesn’t get calm thinking of Abir. Nannu tells her that Abir can’t be her companion. He tells that he will always be with her, no matter what happens, since they are friends first. He proposes Mishti for marriage since he also has feelings for her. He tells Mishti that if they have good compatibility and understanding, then its enough for them to spend their lives together. He asks her to give their relationship a chance. He wants to turn their lie about the fake relationship into truth. Mishti is confused. The family looks after her with love.

Jasmeet shows some annoyance since she never imagined that the girl she dislikes since childhood will be her Bahu. Rajshri and Varsha normalize Jasmeet. Abir overhears Kuhu’s conversation with Varsha. He learns that Mishti doesn’t love Nannu, but there is possibility of their marriage.

He doesn’t want to come between Mishti’s happiness, since he has just hurt her always. Abir packs his bags to leave, while Meenakshi gets worried. Parul and Nanu question him about his leaving. Abir lies that he planned an outing with Kunal and Nanu. Nanu understands that he is hiding his sorrow. He advises Abir to keep his ego and anger aside and just go to meet Mishti to confess his love. He wants Abir to get his bride. He tells that nothing worse can happen with him, he has to take a chance. He motivates Abir to become the lover boy again and chase his love until he attains.

On the other hand, Vishwamber plans to keep Tilak ceremony without consulting Mishti and Nannu. He wants to test his faith, if Mishti values him and his love. He doesn’t want to see Mishti in sorrow further. He tells Rajshri that none should talk to influence Mishti’s decision. He tells that he wants to see if his upbringing was right for Mishti. Nanu asks Abir to apologize to Mishti and express his feelings. He doesn’t want Abir to just think of Kunal all the time. Abir goes to meet Mishti. He overhears Rajshri and Varsha’s conversation.

He feels sad knowing he has broken Rajshri’s hopes as well. Rajshri loved Abir as her son. She is much hurt the way he broke up with Mishti. Abir doesn’t find Mishti in her room. Mishti returns Jugnu’s clothes and gives a letter for Abir. She asks him to pass her letter to Abir. Abir calls Jugnu if Mishti came there. Jugnu gets scared of Meenakshi and lies to Abir. Abir thinks Mishti didn’t go to his house, which means she is with Nannu. Mishti and Abir have a hit and miss. Mishti dreams of Meenakshi confronting her. She is afraid that Meenakshi may get the letter and really insult her family. She wants to call Abir and meet him.

Rajshri asks Mishti about her feelings for Abir. Mishti confesses that she loves Abir. Rajshri tells that she isn’t sure if she could believe Abir again. Mishti feels Abir would come back. Vishwamber doesn’t think so. He gives some time to Mishti to test her fate and convince Abir for marriage. Meenakshi keeps Mishti and her letter away from Abir. Mishti and Abir will take a stand for their love. Abir will make a grand entry in Mishti and Nannu’s Tilak. Keep reading.