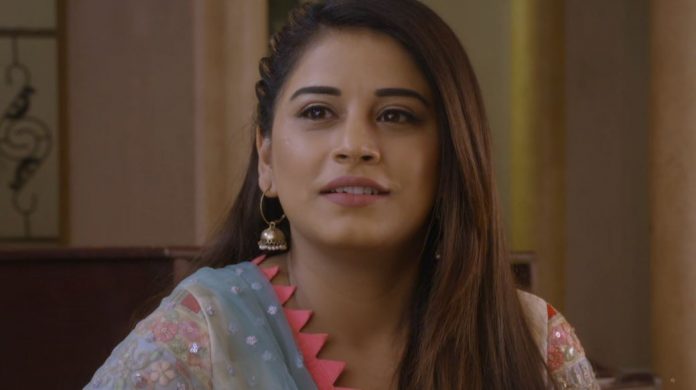 Nimki Vidhayak Manmohini Highlights Upcoming Shukla’s party men blame Nimki. Nimki tells them that she is innocent and immature. She asks Tripathi why did he lose his friend. She makes him against Shukla. Nahar also influences Tripathi. Nimki asks Tripathi to ruin Shukla’s image before he does anything with him. On the other hand, Mintu plans to make a video with Dadi. Dadi isn’t at home. He looks for her. He gets Dadi’s message that she is going to her friend’s house. He thinks she is lying. He cries that Dadi left the house. He thinks what was she trying to tell him. Anaro consoles Mintu. She asks him if he is crying for that old woman.

Rekha tells that Mintu/Babbu never cried for her like he is crying for Dadi. Anaro tells that Dadi was just a servant, its good she went away, if she comes back then she will kill her. Mintu catches her neck in anger and accuses her for sending Dadi far from him. Nimki meets Ganga and tells him that Tripathi has called the media. Tripathi announces his resignation. Ganga and Parag get glad. Shukla gets raged up and want revenge on Nimki. Shukla points the gun at Nimki, after she hides his ministers somewhere.

Nimki asks Shukla not to shoot her and spoil the game. He tells her that she can save her life by just one option, that’s by revealing about MLAs. She tells the media that Shukla is trying to kill her. She asks the reporters to play this breaking news and make Shukla famous. She isn’t scared of Shukla. She tells that she has already gone through the same drama in her life and also got shot. Shukla thinks she is a mastermind to make Ganga win. Nimki is also playing a game with Shukla and Ganga.

Manmohini:
Shiv gets surprised when a guy comes home and claims to be his younger brother Amar. Shiv catches his collar and asks him who is he, what’s his reality and what are his intentions. Amar asks him to just listen to him once. He makes Shiv talk to Daima on the phone call. Shiv gets confirmed that Amar is his brother. Daima has come back to take revenge. Shiv hugs Amar. Daima clears the truth to Shiv. Amar is Ram and Siya’s son. Shiv and Amar have emotional moment. Shiv tells Amar that Ananya is not married to him. He asks Amar to keep his secret. He doesn’t want Amar to reveal anything to the family.