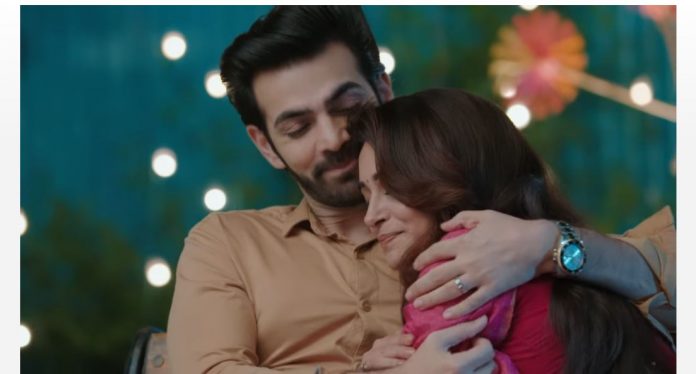 Kahaan Hum Starplus Rocking Shocking Disclosures tonight Suman is stressed for Sonakshi’s career. She wants to inform Rohit about the shocking decision so that he can make Sonakshi change it. Sonakshi tells Rani that she hates lies. She warns Rani that she will not forgive her next time. Nishi and Yash get worried since Rohit is lying a lot to Sonakshi because of them. Rohan wants to meet Pari. He tells her that he loves her and wants to be with her. He asks her not to get scared of Tanya. He feels their love isn’t a crime. Tanya meets him at the office. Her sudden entry shocks him. He acts normal as if he is pleased to see her. Tanya tells him that she wants to go out with him for lunch.

Rohan tells her that he has many meetings lined up. He doubts that she is following him or keeping a track. She lies to him that someone informed him about his location. Rani gets compelled to work according to Nishi’s plan. Rani gets rude towards Pooja, who showers love on her. Rani kicks out Pooja from her room. Pooja is deeply hurt by Rani’s wrath. She wonders what wrong she did that Rani is reacting in such a way. She cries and tells Veena that Nishi would have scolded Rani. She asks Veena to help her.

Veena asks her to just convince Rani by getting her favorite food. She tells that she convinces Naren the same way. Pooja thanks her for the wonderful idea. She goes to convince Rani. Veena wishes Rani stays happy. Rani wants to shock Pooja again so that she leaves from their lives. Nishi and Yash are worried for Pooja, whom they are putting in sorrow by their plan. Rohit asks them why did they plan such a thing to hurt Pooja to save her from bitter truth. He tells that he has secured Sitara, but he is feeling bad to threaten a mother about a daughter.

He tells that he is doing this crime just because of them. He asks them not to hurt Pooja by any cheaper plans. He asks Nishi not to use her mind next time. He gets summoned by Suman. Suman calls him home urgently. He rushes to meet Suman and learns that Sonakshi is leaving her show. He can’t believe Sonakshi’s reasoning that she is ending her career since she wants to enjoy her life. Sonakshi tells that she had earned for many years and now she can look after her family. She tells that she has given her resignation to Netra. Rohit asks her how can she decide this suddenly. Sonakshi tells that she wants to be with her family, she is fed up of work.

Suman doesn’t want her to ruin her career. Rohit finds Sonakshi covering the truth. He asks Suman not to take tension and just let him talk to Sonakshi. Sonakshi tells him that she wanted to tell him about her decision, but never got a chance. He asks her not to sacrifice her career for the sake of his family. He wants to know the real reason. He tells that he will not accept any petty reasoning from them. She tells him that she has a public image and fandom, which doesn’t go along with her in-laws. She tells that if she wasn’t an actress, then her in-laws would have not got affected.

She wants to consider that her in-laws don’t like the side effects of her career. She tells that they have gone through a lot of drama because of her career. She wants to discontinue her career for the sake of her family. He calls it a sacrifice. She tells him that she doesn’t think of it as a sacrifice. She wants to take a break for some time. She tells that she will have a new business after some years. He tells her that he wants her to be happy and do her work. He knows her work gives her happiness. Even then, he assures that he will always support her. Suman wants to know the reason for Sonakshi’s decision. She assigns a task to Pari.

She asks her to accept Rohan’s job offer and meet him at Sippy mansion to know who is compelling Sonakshi. Pari gets glad to get chances to meet Rohan. Rohan gets his car repaired by the mechanic. He learns that Tanya had fixed a tracker. He thinks Tanya is acting smart. He wants to outdo her. Rohan gets alert. Suman feels Sonakshi shouldn’t quit the show, since it would waste her hard work as well.