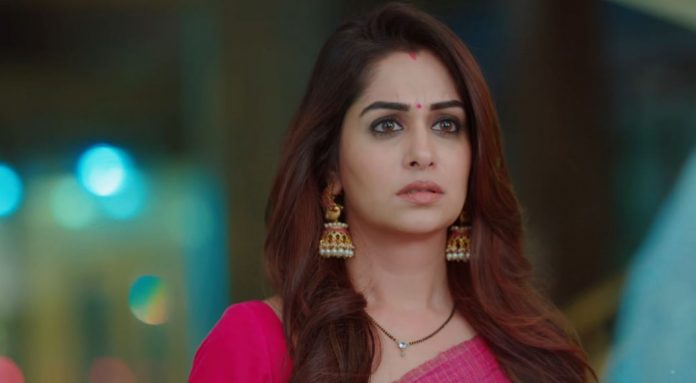 Kahaan Hum Starplus Startled Sonakshi Upcoming reveal Rohit and Sonakshi get into a romantic moment while sharing their icecream. She is worried because of Rani’s matter. She didn’t know about Rani’s background. She tells him that she didn’t know about Sitara’s criminal act before. She apologizes to him for not listening to him and bringing Rani in Pooja’s life. She feels guilty for spoiling the house atmosphere by bringing Rani home. He asks her not to blame herself for everything. He is sure that Rani will act according to Nishi’s plan and soon get ousted from the house. Sonakshi gets Netra’s call. Netra asks her to come soon to meet her.

Sonakshi tells Rohit that Netra would be calling her at the studio for the dubbing work. Rohit sends Sonakshi to the studio and leaves for home. Sonakshi meets Netra. She learns a shocking fact that Rohit secretly met Rani. She wonders what’s the reason. She finds them arguing. Netra asks her the connection between them. Sonakshi tells that Rani is Pooja’s real mum. She doesn’t think there is anything abnormal in it. Sonakshi goes home in an upset state thinking of Rohit’s lie. Rani looks for Sitara’s location clue in Rohit’s room.

Pooja asks Rani what is she finding. Rani asks Pooja not to blame her as if she is a thief. She yells on Pooja for insulting her. She goes to slap Pooja. Naren comes to Pooja’s rescue. He tells Pooja that none can hurt her. He defends Pooja like a father. He warns Rani against hurting Pooja. He tells Veena that Rani was going to slap Pooja. Pooja calms their anger. She wants to protect her mum. Pari meets Tanya and Pooja. She taunts Pooja badly to insult her for the past incident. Pooja bears the humiliation.

She feels bad. Pari goes with Tanya. She tells her that she is joining Rohan’s office. She promises to find out about Rohan’s affair. Tanya happily hugs her. Rohan meets Pari and reveals about Tanya’s spying move. He tells that Tanya is acting smart. He assures that he will fail Tanya’s plan. Pari is scared that the affair will be exposed. Rohan tells Pari that they have to be careful. Veena makes special cake for the family. Pooja awaits Rani. Rani plays a drunken drama to break Pooja’s heart on Nishi’s orders.

She humiliates Nishi and Sippys. She gets bitter towards Pooja. Rani vents suppressed anger on Sippys. Rani can’t hear anything against Nishi, who raised her with so much love. Sonakshi gets to see Rani’s new issue. Rani tells them that Sonakshi brought her home and she should be blamed. She asks for money for which she has come to Sippys. She tells that her motive was just money, not Pooja. She asks Sippys to keep Pooja. She tells that she has no interest in keeping her daughter, she just needs money for a lavish life. She shocks Pooja.

Pooja breaks down seeing Rani’s truth. She ousts Rani from the house. Rohit feels bad that he is lying to Sonakshi. He wanted to tell her the truth. Nishi stops Rohit from confiding anything. Rani meets Rohit to plead to him to know about Sitara. Rohit promises to free Sitara. Sonakshi gets close to know Rohit and Rani’s deal. Pari enjoys Pooja’s plight and does the same mistake again. Sonakshi will soon learn the huge truth that Nishi planted Rani deliberately to hide Pooja’s biological mother, who is none other than Naren’s ex.

Reviewed Rating for this particular episode Kahaan Hum Starplus Startled Sonakshi Upcoming reveal: 4/5
This rating is solely based on the opinion of the writer. You may post your take on the show in the comment section below.