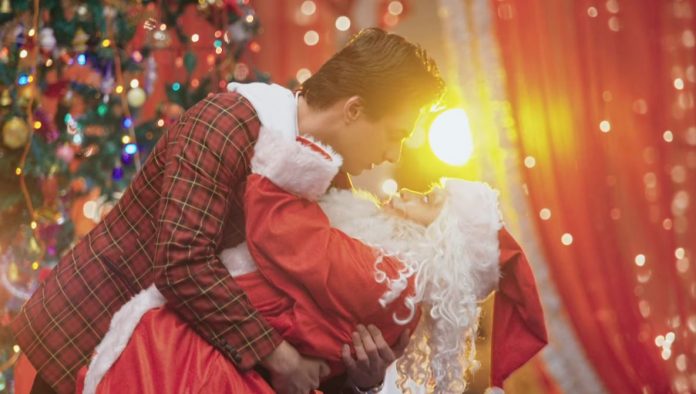 Yeh Rishta Starplus Kaira moment Vedika sly act Vedika doesn’t want Goenkas to doubt on her. She thinks of calling Umesh home and meet him, since her outing can lead to suspicion. She doesn’t want any risk. She has played a big game by faking the kidney donation. She knows that once this truth is out, she will be out of Kartik’s life. She tries to bond with Kartik and acts normal with him. She tells him that she didn’t invite Naira for the party. Kartik is bounded by the promise and complies with her. He feels sorry for himself and Naira. She thinks he is really a nice man to not vent anger and behave good with her.

He tells her that all that matters is her happiness. She gets pleased and thanks him. She works hard for organizing a Christmas party for Kairav and Vansh. Dadi calls Naira to inform her about the party. Naira tells Dadi that they will not leave the golden chance. She tells that she is all prepared to catch Vedika. She reveals her plan. Kairav makes an entry in the party, which surprises Kartik. Kartik hugs Kairav and thanks Vedika for throwing the mega party for the kids in such a short time. Naira gets motivated since she is walking on the true path. She is sure to succeed.

She tells him that once she knows the truth, then Kartik won’t be compelled to accept Vedika’s deal. Vedika can’t believe that Kartik accepted her. She wants Goenkas to accept her too. She promises to keep Kartik happy. Dadi tells Goenkas that Vedika has organized the awesome party. Kairav tells that even Naira could have done the work in a better way. Vedika gets jealous. Kairav, Vansh, Kartik and Samarth make wishes for Santa. Kartik doesn’t think that his wish can turn true. He wishes to meet Naira.

Samarth and Gayu make a wish to get a daughter. Naira gets late in coming late. She arrives as Santa. Vedika waits for Umesh in the party. Dadi spies on her. Kairav and Vansh enjoy with Santa. Naira dances with Kartik and others. Naira tells Dadi that she got late on the way. Naira misses Kartik in her life. Kartik feels Naira is around. He thinks if she could come in front of him. Dadi understands Kartik’s sorrow. She wishes that he gets Naira back in his life.

Vedika bribes Umesh to hide the truth that he donated the kidney to Naira. Naira learns the truth. She gets angered. She wants to find solid evidence. She records Vedika and Umesh’s conversation. Umesh blackmails Vedika. Vedika asks him to deal with Pallavi, who is the mastermind of the plan. Naira and Kartik get into a moment unknowingly. Vedika suspects Naira’s presence. Dadi takes Santa’s disguise and covers up for Naira. Naira follows Umesh to know the entire truth. Vedika fears that Naira has learnt her truth. Naira learns that Pallavi has cheated Kartik by lying about Vedika’s kidney donation. She swears to get Vedika punished for her huge lie.