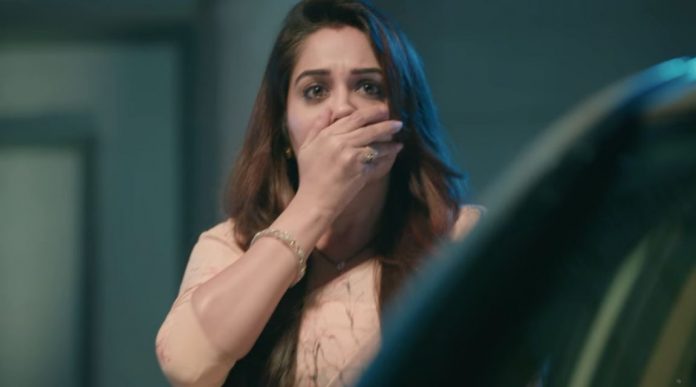 Kahaan Hum Starplus Scary shocker Sonakshi threatened Rohit and Sonakshi have an emotional moment. He tells her about Veena’s strong faith on Naren, who means a world to her. He tells Sonakshi that Veena loves Naren so much that she can never accept the fact that he cheated on her by having an affair with his colleague. He tells that Pooja is Naren’s illegitimate daughter, while Naren’s girlfriend died post delivery. He regrets that Naren cheated Veena and entire family by keeping his affair a secret. He is helpless to hide the secret to keep Veena’s happiness in tact. He tells Sonakshi that he was young when he got to know about Naren’s affair. He gets broken within.

He tells that Pooja’s real mother is dead and its no use to tell Pooja the truth. She asks Sonakshi not to let Pooja or Veena know this, since its shocking for both of them. He asks her to promise him that she will keep this bitter truth a secret. He is ashamed of Naren’s bad character act. Sonakshi realizes that Rohit has been dealing with the secret alone since years. She never thought that he will hurt himself by suppressing his emotions within. She tells him that she is with him and will always be. She wants to stand by him under all the circumstances as promised during the marriage rounds.

She tells him that he needs to understand Veena’s emotions, but not from his perspective. She tells him that Veena has a right to know about her husband’s big deceive, since if the matter comes out to Veena from someone else, then Veena will feel deceived by Rohit as well. She tells Rohit that Veena may accept the truth and then decide to forgive Naren or not. She doesn’t think Rohit should get burdened by concealing the secret. Rohit tells her that he can’t see his mum shattering with the ugly truth. She tells that Veena loves him a lot and would expect him to be true. He fears to lose Veena.

He is ready to do anything to protect Veena from sorrow. Veena summons Rohit and Sonakshi in the party. Sonakshi tells him that truth may come out some day. She calms down Rohit and promises to not reveal the truth. She realizes that someone was spying and heard their conversation. She tries to find out who was outside her room. She fails to know anything. Naren and Veena are declared as the winners of the couple game. Veena gives a lovely speech for Naren, whom she regards the best husband in the world. Veena tells that she loves Naren a lot. She feels lucky to get a loving, faithful and caring husband like Naren.

She wants her children to have such amazing marital relation. Rohit asks Sonakshi to see Veena blinded by Naren’s love. Veena makes Naren wish Sonakshi for the new years. Naren agrees to Veena and wishes Sonakshi with a clean heart. This makes Veena sing her praise further. Naren wishes Rohit and Sonakshi win the couple game next year. Veena tells that Naren is really soft-hearted and forgets annoyance once his anger calms down. She thinks he is the best person she knows. Rohit gets enough hearing Naren’s praise.

He goes to talk to Nishi. He tells that he was helpless to tell Sonakshi the entire truth about Pooja’s real parents. Nishi can’t believe this. She asks him why did he haste and make this mistake. He didn’t wish his marriage to suffer by his lies. He tells that he trusts Sonakshi, there is no secret between them now. Sonakshi meets Nishi and praises her for her big step to cover up her brother’s mistake. She feels proud that Nishi took up Pooja’s responsibility. She tells that she will never reveal the secret to anyone. She calls Nishi the best sister and best mother. She understands Nishi’s emotions.

Nishi requests her to keep the secret safe with her. She doesn’t want her family to break. She can’t break Veena’s heart. She tells that she felt bad knowing about Naren’s affair, but Pooja completed her family. She tells that Pooja shouldn’t know the truth, which she can’t tolerate. Sonakshi promises Nishi and Yash. Sonakshi and Rohit meet Suman for family dinner. Rohit gets embarrassed when Suman indirectly asks Rohit about taking his relation ahead. Pari asks Rohit and Sonakshi to have children. Sonakshi laughs on Rohit, who don’t have time to romance. Rohit takes the remark seriously.

He takes Sonakshi home and tells her that he wants to prove her family wrong. He wants to romance Sonakshi. She gets hindered by a work call. He gets hyper on the disturbing phone calls. Sonakshi comes across a disturbing sight. She finds a scary person staring at her. She tensely asks her driver to find out the person. The person reaches her again and blackmails her about Naren’s truth. He threatens to reveal Naren’s truth to the society. Sonakshi is worried and feels responsible to seal Naren’s truth. She witness her new enemy. A new trouble begins for Sonakshi. Who is the mysterious man chasing Sonakshi and what are his motives? Keep reading to know about the new entry Yashwant.

Best comment on Kahaan Hum last past by Jazz:

Oh not again why Sona had to open her big mouth to Rohit to go n confide in Veena..Rohit has been keeping this truth inside him alone girl just not to break Veena s heart after knowing the truth
I mean c’mon who would tolerate that when a woman loves madly her hubby .. Sona is mixing her Reel life with real life Once again.. Now since someone else is overhearing. Hope this does not stand against her one more time? If this is going from rastogis well they have no class. Pari and Suman.

Reviewed Rating for this particular episode: 4/5
This rating is solely based on the opinion of the writer. How would you rate this episode? You may post your take on the show in the comment section below.