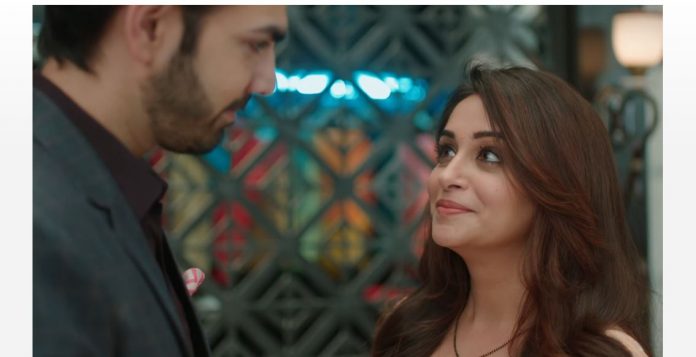 Kahaan Hum Starplus Epic Ronakshi Upcoming shockers Sonakshi gets scared of mysterious person. She goes for the shoot. The mysterious man follows her. He informs his boss that Sonakshi has went for the shoot and would return in the morning. He makes arrangements to block her on the way and threaten her. Sonakshi finishes the shoot. She gets stuck in the traffic jam. She gets disturbed by a violent sight on the road. Shankar asks her not to worry, he will take her home in some time. She faces the same mysterious figure. She worriedly thinks if he is really there or is it just her fear.

In no time, she comes across the scary man, who leaves a note for her. She gets panicking knowing the man knows Naren’s truth. The man threatens to leak the news and ruin Naren’s image. Sonakshi doesn’t have courage to follow the man. He disappears after serving his purpose. He leaves her to think and worry. She wants to rush home and inform Rohit about it. Meanwhile, Rohit shares about his important surgery of a NRI patient. He tells the family that he is stressed about it. The family wishes him all the best. Rohit tells that he has done all the arrangements in advance. Veena gets busy in kitchen work.

She gets a foot sprain. Naren worries for his wife. He gets caring for her. His anger shows his care. Veena knows he loves her a lot. She feels lucky. Sonakshi arrives home and meets Veena. She tries to know Veena’s take on a cheating husband. She tells Veena that she is worried because of the new track in her tv show. She thinks Veena loves Naren a lot and her reaction on the truth can’t be predicted. She tells Veena that Parvati is a character who always supports the truth. She tells Veena’s situation by relating it to her show’s characters. She tells that Parvati comes to know about a cheating husband and wants to expose him.

Veena doesn’t think that Parvati should break out anyone’s happy world by revealing the truth. She tells that if a wife is happy in the false bubble, then she would be let on her own. She doesn’t think any wife would be able to accept such harsh reality. Sonakshi understands that Veena isn’t able to face the truth. Sonakshi gets worried when she sees Rohit overhearing their conversation. She goes to clarify to Rohit. She tells him that she just wanted to know Veena’s take. She promises to never tell Veena about Naren’s cheat.

He asks her not to hurt Veena with the truth. She wants to tell him about the blackmailer. He tells her that he is too nervous about the important surgery lined up. She boosts his confidence by showing immense faith on his talents and expertise. He tells that he is really scared. She supports him completely. He is thankful for her faith and support. She asks him to believe himself and be positive. Rohit leaves for the hospital. She meets Ajit, who is still angry on Naren. She asks Ajit to not feel bad of his dad’s anger. He feels Rohit won’t be able to operate successfully. She asks him to be hopeful and have faith on Rohit. She wants Ajit to be with Rohit and handle the media persons.

Ajit agrees to her. She is sure that surgery will be successful. She tells him that she will plan a surprise for Rohit. On the other hand, Tanya makes a plan to expose Rohan and Pari’s affair. Tanya tells Deepa that she won’t talk to Sonakshi, since Pari can get alert. She tells that she had fixed a spy camera in Rohan’s friend’s house and now she will get the live footage. Deepa asks her to speak to Sonakshi once. Tanya wants her revenge on Pari. She tells that she will ruin Rohan and Pari’s lives.

Later on, Sonakshi hears the same noise again. She spots the man name again. She follows, but he disappears. She finds out about his coming. She gets another note. She learns that the man has sent a parcel for Veena. She doesn’t want Veena to check the parcel that may contain evidences of Naren’s truth. She rushes and learns that Veena isn’t at home. She gets a big relief. She gets the parcel. She gets threatened by the man. She decides to meet him. She wants to know the man’s connection with Naren’s past.

Rohit gets the donor heart organ. He gets hindered by the media. Rohit proceeds for the surgery. Sonakshi goes to meet the blackmailer. She takes Sumit along. The blackmailer gets alert and wants to punish her for the over smartness. He heads to Sippy mansion to meet Veena and tell Naren’s truth.